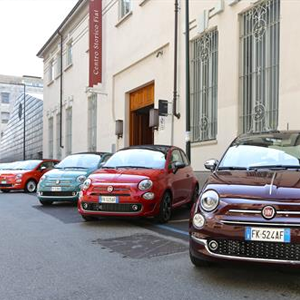 The journey of the Fiat 500 has been 60 years in the making. The unrelenting ‘great little car’ has gone from Dante Giacosa’s desk to the gates of the Mirafiori factory, and from the long avenues of Torino, to the MoMA in New York.

It’s an undisputed global success having sold four million units of the original and two million of the current model, 80 per cent of which are sold outside Italy in more than 100 countries worldwide.

July has been a month of celebrations, with the handover of the two-millionth Fiat 500 and two special editions dedicated to its special birthday; the limited edition 500-60th, introduced at Geneva, and the 500 Anniversario, both of which cleverly blend 60s flair with modern technology.

The secret of the longevity of the 500 has always been in its ability to step beyond its own dimension and become something else, while still remaining true to itself. More than just a simple car, it is an object with a genuine cult following which has intrigued, excited and influenced around the world. On 4th July, the 500 joined the permanent collection of the MoMA and also starred in Fiat’s first short movie. It is a car that is not only a car: it is art. ‘See you in the future’, the tribute video starring Adrien Brody, has totalled over 15 million views already, with the Fiat 500 starring alongside the Oscar-winning actor, telling a timeless love story.

The iconic Fiat has also inspired fashion. The luxury sportswear brand Hydrogen is celebrating the sixty years of the 500 with a limited edition sweatshirt, of which 1957 were made to pay homage to the year of the car’s birth. The sweatshirt “500byHydrogen” is a ‘forever young’ garment and defines the wearer’s personality at a glance.

The story of the Fiat 500 will continue thanks to the commitment of owners, collectors and club members, the pride of Fiat workers and the new Italian postage stamp which has just been dedicated to it – a symbolic gift, a minuscule work of art and a homage reserved only for the most beloved and recognisable icons, which sums up the car perfectly. Popular and democratic, but also sophisticated and collectable, the Fiat 500 will continue to remember the roads that it has travelled and looks forward to those that are still ahead.