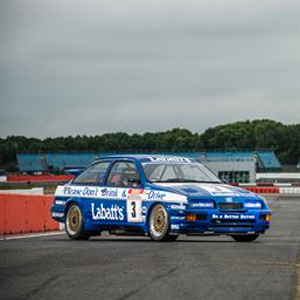 A pair of the most famous BTCC race cars from the eighties and nineties will be offered by Silverstone Auctions at the forthcoming Silverstone Classic Race Car Sale on 27th July.

The BMW M3 and Sierra Cosworth RS500 are in their original Labatt’s colours as driven by Tim Harvey, who went on to become BTCC Champion in 1992 with BMW. Both cars come with entries in the Super Touring Car race at the Silverstone Classic on Saturday, 29th July.

The RS500 is particularly significant as it comes up for sale during the 30-year anniversary celebrations of the iconic machine which first rolled out of Tickford in 1987. This Andy Rouse-built example was part of the Labatt’s 1989 BTCC team and was driven by Tim Harvey who won two rounds that year at Thruxton and Donnington on his way to seventh in the series.

Probably the only surviving Sierra Cosworth RS500 in its original BTCC specification, it was returned to Tim Harvey’s capable hands in 2013 for the Super Touring Car Championship rounds at that year’s Silverstone Classic. The former BTCC Champion finished second on the Saturday race with a fastest lap capping a successful reunion for Harvey and the RS500.

“It was fantastic to get back in that car,” says Harvey of the RS500 on his last outing. “It was like being re-united with an old friend – the same smells and sounds – a real blast from the past.”

After a full engine rebuild by Mountune in 2014 the 560bhp Labatt’s Sierra has been maintained in race-ready condition and is offered for sale with Silverstone Auctions with a race entry at the Silverstone Classic on Saturday, 29th July. This historically important race car is offered with an estimate of £180,000 – £220,000.

Another of the famous Labatt’s cars raced by Harvey is the BMW M3 prepared by Vic Lee Motorsport for the 1991 BTCC season. In the inaugural year of the new two litre formula, VLM re-engineered the E30 M3 for the new regulations and this car boasts all the technical innovations of the day including a relocated fuel tank, a flat floor section, side exhaust, Dave Potter designed suspension geometry and a Hollinger dog-engagement gearbox.

The car was tremendously successful with Harvey’s Labatt’s BMW M3 teammate Will Hoy winning the series in style. This car is one of only five built by VLM and a race winner in Harvey’s hands at Silverstone on his way to eighth in the championship.

“The M3 was a totally different proposition to the RS500,” recalls Harvey. “With the Sierra it was all about exiting corners and straight line speed. The two-litre rules were in their infancy in 1991, and you had to adjust. It was all about momentum and carrying speed through the corners. I remember that car very fondly. I won the last race in 1991 with the M3 and that helped me get the deal to race with BMW the next year when I won the championship. So I would say that very car had a big impact on my career.”

The M3 is believed to have retained its original livery throughout its existence and been in private collections since 1992. More recently it has contested the HSCC Super Touring Car Challenge, and is still fiercely competitive. Finding a competitive car with this level or provenance is becoming increasingly difficult and therefore represents an excellent investment opportunity with a sale estimate of £140,000 – £180,000 and, as with the RS500, can be raced on Saturday 29th July at the Silverstone Classic.

Will Smith, sales manager of Silverstone Auctions, adds: “We’re very excited to offer two of Tim’s most famous race cars both in their original Labatt’s colours. They represent a wonderful piece of British Touring Car Championship history and are a wonderful opportunity for someone to own the most recognised and admired cars from a golden era of British motorsport.”

The ex-Tim Harvey Labatt’s BMW M3 and Ford Sierra Cosworth RS500 are both offered for sale at the Silverstone Classic Race Car Sale at the Wing Building, Silverstone, on July 27th.