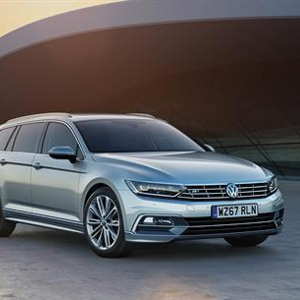 Volkswagen is enhancing the specification of the award-winning Passat. Available to order in its updated guise from today, Friday 5 January, each of the five Passat trim levels gain new standard features inside and out.

Every new Passat now comes with Volkswagen’s App-Connect system as standard. App-Connect enables the driver or a passenger to link their smartphone to the car via a USB cable. The screen of the phone is then ‘mirrored’ onto the Passat’s infotainment touchscreen.

This enables the user to play music and playlists on the move. The car will also read out text messages and allow the user to dictate a reply. A wide variety of other apps are available, too, including Spotify and Skype. App-Connect works with Apple CarPlay™, Android Auto™ and MirrorLink™ which means it is compatible with the vast majority of mobile smartphones.

From today the upgraded Passat SE Business, R-Line and Alltrack models will feature heated front seats as standard. Already on the Passat GT’s extensive equipment list, this means nearly every new Passat from now on will include this welcome addition.

Another update for the Passat SE Business is the addition of a colour multi-function display. The multi-function computer gives the driver a variety of information about the status of their Passat.

The Passat SE Business gains the most enhancements and, in comparison to the previous model, has £1,955 worth of extra equipment. This contrasts to a small price increase to this trim of £550 RRP OTR, so the customer saving is £1,405.

R-Line models have a similarly high total customer benefit of £1,315, and on Passat Alltrack models the specification adjusted saving is £1,000. The Passat GT enhancements, including a small £200 increase in the OTR RRP, result in a customer saving of £705.

The price of the Passat S hasn’t changed, and so it continues to start at £22,025 RRP OTR. The extra equipment on this model equates to a customer saving of £165.

The Passat won the prestigious European Car of the Year award when it was launched in 2015, and it continues to offer a high level of value for money. Every model includes, as a minimum, Volkswagen’s latest generation Composition Media infotainment system with an 8.0-inch colour touchscreen. This includes Bluetooth telephone and audio connection for two compatible smartphones, DAB digital radio, a CD player and an SD card reader.

Starting the range is the Passat S, which has 16-inch ‘Aragon’ alloy wheels and chrome radiator louvres, while anti-lock brakes, disc brakes, and electric front and rear windows add to the equipment list. The Passat S also features power-assisted steering, an electronic handbrake with hill-hold function, and a Driver Alert system to monitor driver fatigue.

In 2017 Volkswagen significantly updated the Golf, it’s best-selling model to date, and the German manufacturer is starting the New Year with a further addition: the 130 PS BlueMotion version of the new 1.5-litre TSI EVO engine is now additionally available to order on Golf GT hatch and Golf Estate GT.

Focused on even better fuel economy, the 130 PS 1.5-litre turbocharged petrol engine features a full shut-down mode. When the car is cruising, all four cylinders can temporarily turn off. As soon as more power is needed, the engine restarts. The driver barely notices the process other than the illumination of a small light on the dash panel to show the engine is in ‘Eco’ mode.

In the Golf hatch this new BlueMotion engine takes the car from a standing start to 62 mph in 8.8 seconds, whether the six-speed manual or seven-speed DSG automatic gearbox is selected. Top speed for each variation is also the same, at 130 mph. The 130 PS of peak power is reached between 5000 and 6000 rpm. On the Golf Estate, 0-62 mph takes 9.2 seconds and top speed is 131 mph.

This technologically advanced engine was already available in SE and SE Navigation models on both the Golf hatch and the Golf Estate. It continues to be available in its more powerful 150 PS guise on the Golf GT and R-Line hatch models, and Golf Estate GT. In the 150 PS version two of the four cylinders are able to shut down.

Volkswagen today also introduces a petrol engine to the latest Golf Alltrack for the first time. Previously available with a choice of 2.0-litre diesels with 150 PS or 184 PS, the model now features the option of a 1.8-litre TSI petrol engine with a peak power output of 180 PS.

Designed to tackle rough terrain as comfortably as the urban jungle, the Golf Alltrack is based on the Golf Estate. It has an increased ride height (approx. 30 mm higher than the Golf Estate) and off-road suspension. It also has unique styling, including anthracite wheel arch protection and matt-chrome effect side-sill and underbody protection. Inside, it is equipped with Active Info Display, a 12.3-inch TFT screen, in place of traditional instrumentation.

Equipped to tackle rugged ground, the Golf Alltrack is available as a 4MOTION all-wheel drive car. In the new 1.8-litre 180 PS petrol version the Alltrack reaches a top speed of 135 mph and sprints to 62 mph from a standstill in only 7.5 seconds. Peak power is 180 PS at 4500-6200 rpm.