England’s Motorways To Get Spring Clean 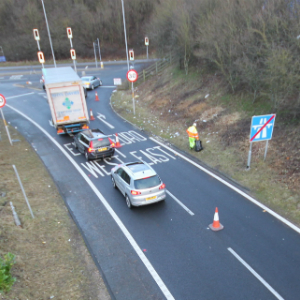 More than 3,000 sacks of litter were collected from England’s motorways during a 3-day spring clean last month – enough to reach the top of The Shard nearly 5 times over if they were stacked end to end.

Highways England routinely collects rubbish from motorways throughout the year and last month its contractors’ activity coincided with the national Clean for the Queen initiative to mark the Queen’s 90th birthday in May.

Workers targeted litter hotspots on motorways across England between Friday 4 and Sunday 6 March and collected 3,188 sacks of rubbish.

More than 150,000 sacks of litter are collected by Highways England’s contractors every year as part of routine maintenance work – an average of 411 bags every day. It costs over £40 to collect each sack – roughly the same cost as fixing a pothole.

Roadside litter can lead to hazards for other motorists if it is thrown from moving vehicles, cause a threat to wildlife and lead to flooding if drains become blocked. It also puts the workers who are collecting the rubbish from the side of busy motorways at risk.

“Our contractors collect vast amounts of litter from motorways every year but we’d much rather they spend their time fixing potholes and carrying out other essential maintenance work.

“The litter on our roads can cause a hazard to drivers, our workers and wildlife so I’d urge everyone to keep a bag in their car which they can use for rubbish, and then put it in the bin when they get home.

“We targeted known litter hotspots last month and it would be great if these hotspots remained free of litter in the weeks and months ahead.”

Highways England has also released a time-lapse video – www.youtube.com/watch?v=cICUdLsvqkk – showing the build-up of litter at junction 2 of the M606 near Bradford – a known litter hotspot.

The video features ‘grab-cam’ footage where a camera was secured to a litter grabber to show a few of the thousands of individual pieces of litter collected every year from England’s roads.