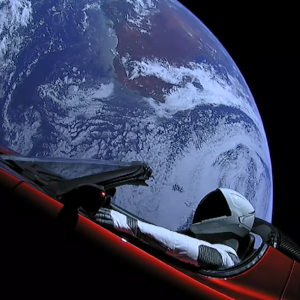 SpaceX billed it as “an endless road trip past Mars”, but the Tesla blasted into space on Tuesday may actually be heading towards an asteroid belt.

While the Cape Canaveral launch of Elon Musk’s Falcon Heavy – the most powerful in the world – was a big success, it seems the red sports car may have overshot its mark.

A diagram showing the orbit of the Roadster – ‘driven’ by a mannequin called Starman – showed that it had gone further out into the Solar System than originally planned.

Rather than entering Mars’ orbit, the Tesla looks to be on a path towards the asteroid belt between Mars and Jupiter.

A SpaceX livestream showed the car cruising through the Van Allen radiation belt in Earth’s magnetosphere, with David Bowie’s Space Oddity playing in the background and a note on the dashboard saying “Don’t Panic”.

Musk, who wants to colonise Mars, said the approach was “kind of silly and fun, but I think that silly and fun things are important”.

Initial projections indicate the car will get relatively close to the orbit of the dwarf planet Ceres.

The final fate of the car – which was unlikely to hit Mars on its initial path, but now could collide with a space object on its new course – is unknown.

It is possible its journey could last a billion years and take it as far as 250 million miles (400 million km) from Earth – the same as a trip around the equator 10,000 times.

Describing the launch as “probably the most exciting thing I have seen literally ever,” Musk has now proved Falcon Heavy’s credentials for putting objects into deep space.

The only other blip for the mission was the rocket’s central booster which, unlike the two side boosters, failed to safely return to earth.

Musk said that it had crashed into the Atlantic at 300mph, missing the floating landing platform.

SpaceX hopes the 70-metre Falcon Heavy – which has a total of 27 engines and can carry a payload of 64 metric tons – will now be seen as a potential equipment carrier to deep space destinations.

A second rocket nicknamed BFR – Big Falcon Rocket – is being developed by SpaceX with the intention of one day sending humans to the Moon or Mars.