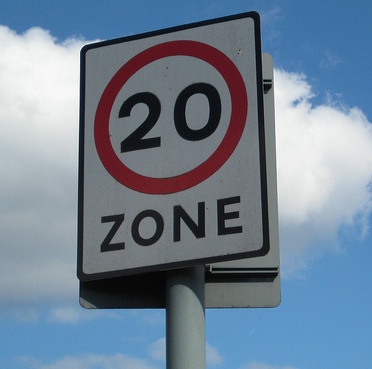 SUPPORT: Do you back 20mph zones?

Eight in ten people support 20mph speed limits around schools, on residential streets and in village, town and city centres.

Figures from Brake and Allianz Insurance reveal 78% are in favour of proposals to make  20mph the urban norm, with the road safety charity yesterday taking their GO 20 campaign to Parliament.

Eight in ten (79%) also believe increasing the safety of roads and routes in their town or village would encourage people to walk or cycle.

“Public opinion is overwhelmingly in favour of reducing the urban speed limit to 20mph and this should act as a powerful force for change.”

Julie Townsend, Deputy Chief Executive of Brake, said: “The GO 20 campaign is about defending everyone’s right to walk and cycle freely without being endangered, whether it’s to get to work, school, the shops, or just getting out and being active.

“We need to tackle the senseless and violent casualties that continue to happen daily on our roads, and we need to enable people to live healthy, active, social lives.

“It’s clear that 20mph limits in communities can help bring this about – and it’s clear this is what people want.

“That’s why so many local authorities are making the switch from 30mph to 20mph.

“With many people already reaping the benefits of living in 20mph areas, we’re reaching a point where it makes no sense to retain 30mph as the default limit in built-up areas.

“It’s time for the government to GO 20 nationally, to save councils money and help create safe, active, happy communities nationwide.”

Speakers at the Brake and Allianz Insurance GO 20 parliamentary reception discussed the benefits of 20mph limits and progress being made by councils in implementing them.

Guests included Robert Goodwill MP and bereaved father Dave Britt, who spoke about how a 20mph speed limit could have saved his son’s life.

Figures show that introducing 20mph limits in Portsmouth and Camden have reduced casualties by 22% and 54% respectively.

Jon Dye, Chief Executive at Allianz Insurance, added: “Public opinion is overwhelmingly in favour of reducing the urban speed limit to 20mph and this should act as a powerful force for change.

“The government’s own report states that approximately half of pedestrian fatalities occur at 30mph impact speed or below, and that even small reductions in impact speed can have a large effect on the risk of fatal injury.”