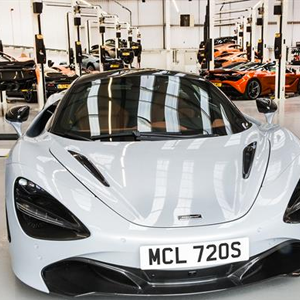 It follows MCL 650S, which went under the hammer for £12,500 in May 2014 only to be succeeded by 650 S which sold for £31,000 that same year and is one of a raft of registrations closely related to range-topping sports cars available to buy during this summer sale including 488 A and A488 GTS, which relate to the Ferrari 488, and 996 GT which will resonate with Porsche fans.

But the lots aren’t just for supercar lovers. As ever, the DVLA will be auctioning a whole series of fun-related registrations. For poker players there’s ACE 10W and fans of the phenomenally successful Lord of the Rings books and films there’s 81 LBO!

The registrations on offer have been chosen to suit all tastes, styles and budgets and range from marks that reflect names such as BR16 ETT, 511 ENA, RUT 1H and SM17 THY through to quirkier offerings such as JU57 ASK, JE11 ANS and ST11 YLE.

Registered bidders who attend the sale will be given free access to the Mercedes-Benz World museum and will be entitled to free ‘hot lap’ passenger rides in some of the most powerful and glamorous cars currently produced by Mercedes.

Jody Davies, of DVLA Personalised Registrations, said: “We are returning to Mercedes Benz World because of its popularity with our customers as it offers so much for the entire family to enjoy and experience. But our sales are all about personalised registrations and I’m delighted to say we have again managed to unearth another phenomenal array to suit all tastes and budgets.”