New research by on-line parking portal YourParkingSpace.co.uk shows that homeowners across the UK are making hundreds, even thousands of pounds, by renting out their driveways as parking spaces. 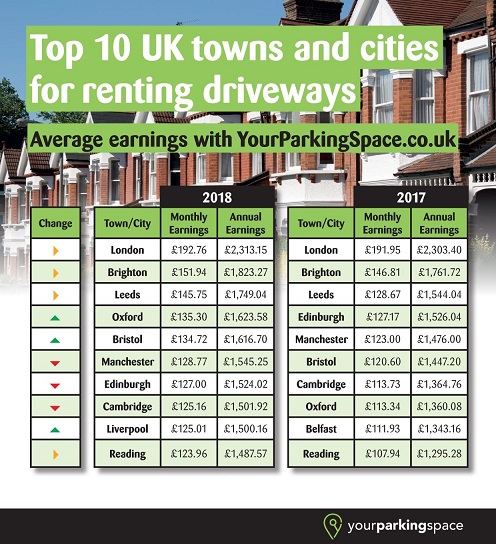 While London takes the number one spot for driveway earning potentials – £2,313 per year on average – there’s good news for residents of Brighton, Leeds, Oxford, Bristol, Manchester, Edinburgh, Cambridge and Liverpool, where driveway owners with YourParkingSpace.co.uk made more than £1,500 per year on average.

Compared to the previous year’s figures, the top three cities all remain in the same position, while Oxford jumps to fourth spot, up four places from 2017, while Bristol moves one place higher.

Those top cities moving down the league table compared to 2017 include Manchester, Edinburgh and Cambridge.

Nevertheless, even driveways in those towns and cities placed much lower down the league table were also making sizeable amounts for their owners. Residents of Wigan, placed at number 50 in the YourParkingSpace.co.uk research, were still earning £637 per year on average.

Within London, the borough of Kensington and Chelsea took top spot with residents earning a staggering £3,694 per year on average by renting out a driveway, garage or secure parking space.

Harrison Woods, managing director at YourParkingSpace.co.uk, said: “More and more homeowners across the UK are significantly boosting their household income by renting out their driveway to motorists needing somewhere to park.

“It is particularly pleasing to see that money can be made from renting out a driveway in all parts of the UK. Demand will always be strong for driveways situated close to town and city centres, railway stations and transport hubs, sporting arenas and music venues.”

More towns breaking the £1,400 per year earning threshold were Reading, Southampton, Glasgow and Belfast, while residents of Cardiff and Aberdeen made more than £1,300 on average with YourParkingSpace.co.uk

Other cities outside England doing well were Dundee and Swansea, which earned driveway owners £1,172 and £866 per year on average respectively.

Harrison added: “Parking on a pre-booked rented driveway is a win-win situation. It means additional income for the homeowner, while for the motorist it means no more parking worries.”

For more information about how you can make money renting out a driveway, garage or secure parking space, visit www.yourparkingspace.co.uk