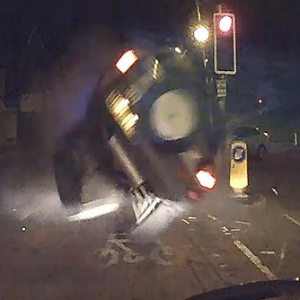 This is the dramatic moment a teenager driver smashes into a fleet taxi driver after a 75mph police chase.

The taxi’s VisionTrack VT2000 camera captures the moment the 17-year-old’s Toyota RAV4’s spins in the air is sent hurtling towards his Vauxhall Astra ‘like a missile.’

The Astra was virtually written off in the collision but the footage from the camera was so clear that he was not even required to give a statement to police.

The video was used in evidence at Liverpool Crown Court this month where teenager Sean Grindle admitted dangerous driving and driving without a licence and without insurance.

Judge Neil Flewitt, QC, said it was ‘a miracle’ that no one was killed but decided not to jail Grindle, now aged 18, because it was his first offence.

VisionTrack managing director Simon Marsh said: “You can clearly see on the footage that the RAV4 spins into the air, demolishes a bollard and then collides head-on with the taxi which was nearly a write-off.

“The RAV4 ends up on the bonnet of his car, jolting the driver and his passenger backwards, before coming to a rest partially on its side.

“In this case, the specialist taxi insurance broker Patons recommended that the taxi fleet invest in a VT2000 and they are glad they did now. Patons

have been quick to utilise the latest technology to improve their policies.

“All the footage on VisionTrack cameras is court admissible. The video in this case clearly

showed how the taxi driver had a very lucky escape.

“It enabled his insurers to sort out the case quickly without any impact on the fleet’s claims’ experience.”

The VT2000 camera is VisionTrack’s flagship, 3G, full 1080p model. It can instantly transmit live snapshot images or request HD footage to a cloud-based platform to give a comprehensive view of before, during and after an incident.

The VT2000 reports information such as vehicle location, speed, driving style and, if needed, impact force, allowing fleet managers to monitor driver behaviour at all times.

The court heard police officers spotted the Toyota in Seaforth, Liverpool, at around 1.10am on June 18 last year. Trying to avoid capture, Grindle overtook another car, drove the wrong way down a one way street and crossed a give-way junction without slowing.

His luck ran out when he shot through another set of red lights at 75mph and struck both taxis.

Grindle, who was working in a garage, had bought the Toyota and was preparing to take his test when he panicked after police asked him to pull over.

He was given 10 months in a young offenders’ institution, suspended for two years, and banned from driving for two years.

Around 40% of fleet taxi drivers now use dashcams like VisionTrack to protect their no claims and guard against cash-for-crash fraudsters.

you can see the full crash video here