Don’t Let Lunch Be A Crash Diet; The Dangers Of Eating At The Wheel 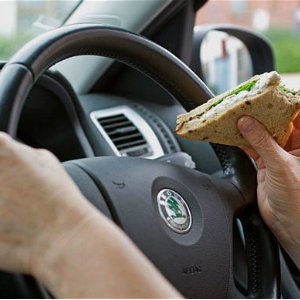 A new survey by Brake, the road safety charity and Direct Line has found a third of drivers questioned sometimes eat food behind the wheel. Just over a quarter of people (27%) have unwrapped and eaten the food and a third (33%) admit to eating food someone else has unwrapped for them.

The worst offenders are drivers aged 25-34. More than half (55%) in this age bracket admitting they have unwrapped and then eaten at the wheel, with just under a third of those admitting to doing it at least once every week.

Additionally, one in ten of the drivers who responded said they had been involved in a near-miss because they were distracted by eating food. A near-miss was classed as having to suddenly break or swerve to avoid a hazard.

Research shows that drivers who eat and drink at the wheel are twice as likely to crash[i] and this risk may be even higher if the food is hot, messy or you have to unwrap yourself[ii]. Eating and drinking while driving diverts attention away from the driving task, increasing reaction times by up to 44%, meaning drivers will respond to hazards much more slowly. It also causes physical distraction, as at least one hand is off the wheel holding food or drink[iii].

While is not against to law to eat while driving it can become a crime if a person’s driving becomes distracted because they are unwrapping food or eating it. Driving without due care and attention or careless driving is a criminal offence, whatever the distraction. The maximum penalty for the offence is a driving ban. 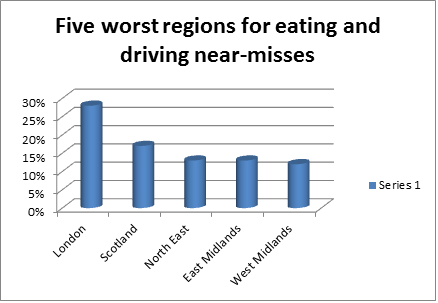 Off-duty firefighter and dad of two, Joseph Wilkins was cycling when he was knocked down and killed on a country road near Abingdon in May 2012. The driver was eating a sandwich at the wheel and convicted of causing death by careless driving.

Joe’s partner Nicci Saunders said: Joe was a kind, caring, loving, father and my best friend.  He was in training to cycle from Lands End to John O’Groats and had completed the same ride twice that week.  He went out on 24th May with a friend to do the ride again.  He kissed his two young children goodnight, kissed me goodbye and went out.  The next time I saw him he was lying dead in a road after being hit by a car at 60 miles an hour, breaking his neck.  To tell a two and a five year old that their daddy will never be coming home again is still the worst thing I have ever had to do in my life.

Joe was cycling down a straight road on a beautiful sunny day when Paul Brown was distracted by eating a sandwich while driving.  He had over 13 seconds to see Joe, but didn’t, and ploughed straight into his back wheel, killing him instantly.  The thought that he lost his life was inconceivable but to find out it was due to someone eating made it feel even more of a loss. This just should not have happened.

I see people all the time eating and drinking in cars and by doing this taking their eyes off the road.  Just a couple of seconds can take another person’s life and put hurt in to a family that never goes away.  It’s been four and a half years now, yet he is still missed as much now as he was on that first day.  The girls, as they get older understand more what they are missing without having their dad around and all because someone couldn’t wait to get home to eat.”

Alice Bailey, communications and campaigns advisor for Brake, said: “Imagining a distracted driver you may think of someone on a mobile phone, but many things can dangerously draw our attention away from the roads around us. In the fast-paced world we live in it is sometimes tempting to eat on the go, but drivers who are distracted by something else, even food, significantly increase their risk of causing a devastating crash. If you’re hungry, you probably need to take a short break from driving to eat and recuperate before continuing your journey when you’re not distracted by hunger or eating.”

Gus Park, commercial director of motor at Direct Line said:“Whilst we appreciate people’s busy lifestyles often dictate that we eat on the go and that a sudden pang of hunger can seem impossible to ignore, we urge drivers not to let their stomachs get in the way of good judgement and safe driving. If you really can’t wait until you reach your destination to eat, then stopping off for a comfort break is a much better idea than eating at the wheel. Pit-stops provide a great opportunity to re-energise before the next leg of your journey.”