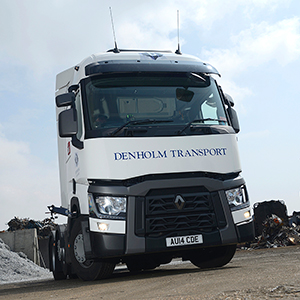 The first three Range Ts went on the road in April, with the remaining four to be delivered by the end of the year.

All seven Range Ts will be maintained by Renault Trucks’ approved repairer, Norfolk Truck and Van in Ipswich.

Denholm Transport claim driver acceptance and strong dealer support were key factors in the company’s decision to select the Range Ts to join their fleet.

David Burgess, Transport Manager at Denholm Transport, said: “Alongside our container operation, our general haulage business is really picking up, so the time was right to bring new trucks on to the fleet.

“As well as fuel efficiency, in today’s market we need to consider driver appeal to ensure we continue to attract and retain the best drivers, so the extra space in the Renault Range T cab and the assertive look of the new truck on the road makes a big difference.

“BRS offered us a competitive deal and we also have a great relationship with our local dealer, Norfolk Truck and Van, who always look after us.”