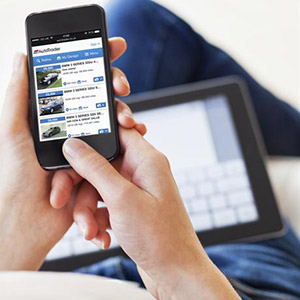 Auto Trader have just confirmed the tipping point date at which searches for cars on mobile and tablets exceeded those made via desktop, as being March 2013, much earlier than forecast by Google.

Cross-over for all searches was originally predicted as December 2014 by Google, in an address made at this year’s Starcom MediaVest Group’s mobility conference.

Nick King, Market Research Director at Auto Trader, said: “The fact that mobile and tablet use has exceeded desktop should come as no surprise.

“What is more interesting is the rate of change and the fact that car buyers seem to be blazing a trail in the use of mobile devices.

“Nearly seven in every ten full-page advertisement views were made on tablet or mobile last month.

“That should be a rallying cry for dealers who question the value of optimising their websites for mobile devices.”

In total more than 44.3million visits to Auto Trader were made in June – 19million by mobile devices, 8.7million on tablet and 16.6million on pc.