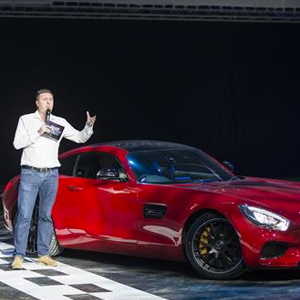 Sky Sports F1 Commentator David Croft is confirmed to host all of the motorsport thrills and spills from within the Live Action Arena at Autosport International 2018.

Visitors to Europe’s biggest motorsport show in January can expect the best live racing entertainment for all of the family. Crofty will host all of the action across 13 shows over the Autosport International weekend in the 5000-seater arena. Tickets to the ever-popular 60-minute long performances are included with every ticket to the main show.

The 2018 Live Action Arena entertainment is set to feature a range of stunts and racing action from numerous series across the world of motorsport, ensuring audiences are kept on the edge of seats.

Crofty is on hand to make sure audiences are kept up-to-date with all of the driving demonstrations and racing action whilst conducting interviews with a variety of celebrities set to make an appearance across the weekend. A “petrolhead heaven”, the Live Action Arena is a true theatre, allowing audiences to experience all of the sounds and smells up close as drivers take on the challenging layout in Hall 5 of the NEC, Birmingham.

This year saw stuntman Terry Grant revving up the crowds with a daredevil loop-the-loop performance with Lee Bowers, whilst a whole host of current BTCC racers all went head-to-head in a highly competitive time trial. The Live Action Arena also paid tribute to motorsport across the ages including a special Rallycross feature, celebrating 50 years of the series, all the way through to the future of motorsport with the Electric GT Tesla.

David Croft, said: “I’m looking forward to returning to the Live Action Arena to provide commentary on all of the high-octane action which thrills thousands of fans each January. From drifting and time trials to Terry Grant’s nail-biting loop-the-loop earlier this year, each show is always an exhilarating experience and I can’t wait to see what the 2018 event has in store.”

“Crofty brings an in-depth knowledge of the various categories of motor racing represented within the Live Action Arena and an enthusiasm that provides audiences with all of the information throughout the tyre squealing thrills and high-octane smells. Stay tuned for more news on some great action from across the world of motorsport to be confirmed in the coming weeks.”