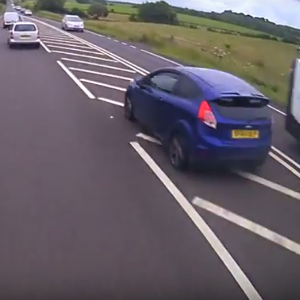 A 3G vehicle camera captured the reckless behaviour of a Ford Fiesta driver, which resulted in a serious crash on the A76 near Kilmarnock in East Ayrshire, Scotland. The IT1000 device from Intelligent Telematics, fitted on a commercial vehicle, recorded the irresponsible overtake that led to the collision with two vans. Miraculously no one suffered a serious injury, but multiple vehicles were damaged during the incident with debris scattered over the road.

The video footage shows the moments leading up to the crash as the driver of the Ford Fiesta attempts a high speed manoeuvre on the single-lane road, using the central cross hatched area. While dangerously passing other road users the vehicle hits two vans and then narrowly misses a serious collision with an oncoming car as it spins out of control.

Sam Footer, Head of International Business and Strategic Development at Intelligent Telematics commented: “Reckless driving, such as this crazy overtaking, represents a huge risk to all road users. Our 3G vehicle cameras are being used by an increasing number of businesses to capture evidence of crashes and near misses involving their vehicles, as well as identify areas of improvement within their own fleet operations. This is helping combat dangerous behaviour and encourage higher levels of safety.”

Intelligent Telematics’ IT 1000 is the most sophisticated 3G vehicle camera solution currently available with unrivalled accuracy and technology. The forward-facing device transmits footage of accidents and near misses via a secure 3G private network supported by Telefonica/02 to a web-based interface with live email and SMS alerts, so a triggered event can be viewed almost immediately.

The video footage of the near miss incident can be viewed here.