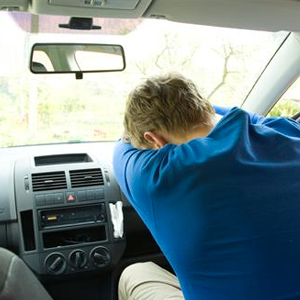 When it comes to driving we’re all guilty of making silly mistakes but now a new study has uncovered the daftest things we do on the roads.

Research by industry giant LeaseCar has found the silliest mistakes that consistently make driving more difficult than it needs to be.

Some of them, like losing keys and storing breakables on the seat instead of the boot or footwell, affect only the car owner themselves.

But others, like parking too close, cause a headache for anyone else sharing the road.

Putting the wrong fuel in the car is an expensive error that holds up traffic when the car breaks down in the worst possible place.

Some motorists have also learned to their cost that parking payment slips should always be placed in the front windscreen, no matter which way the car is facing – or else they get ticketed.

Tim Alcock of LeaseCar said: “None of us are perfect and the best drivers never stop learning.

“At the same time, our study found the same few dunderheaded driving habits kept cropping up, so it’s a good idea to make a note of them.

“Driving is stressful enough as it is, so take a little extra care to try to keep your car and your blood pressure running as smoothly as possible.”

The ten daftest things that motorists do (in no particular order)