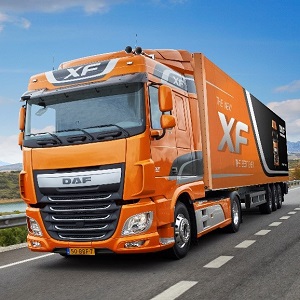 DAF Trucks has announced a 90th Anniversary of its XF model, commemorating the creation of the company by Hub van Doorne in 1928.

The 90th Anniversary Edition is limited to just 250 vehicles, available as a 6×2 tractor unit for the UK and Ireland market. Each example is equipped with a premium option package, the Super Space Cab and the most powerful PACCAR 530hp MX-13 engine.

The XF 90th Anniversary Edition can be specified in Anniversary Black, Rouge Flamme and Jamaica Blue exterior paint, and are matched by coloured strips on the grille and a special hand-crafted version of the DAF logo on the front, sides and back of the cab. LED headlights, Skylights, for and cornering lights are also included as are Aloca aluminium wheels, a roof air deflector and air horns.

Inside the XF 90th Anniversary Edition is equipped with Xtra Leather air seats, a high-specification radio and navigation system, climate control, TruckPhone, a microwave and DAF Night Lock amongst other features. Each example also comes with a numbered luxury gift set including a leather travel bag, a jacket and a DAF Waterman pen, plus a 90th Anniversary Edition sketch signed by DAF Chief Designer Bart van Lotringen.