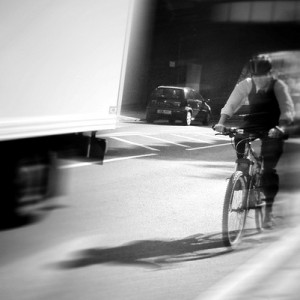 SAFETY: Campaign rolled out across UK

A campaign aimed at raising cycle safety awareness is being rolled out in cities across the UK following a successful trial in London.

The poster campaign, aimed at cutting the number of cyclists killed or injured, will now target road users in Leeds, Manchester, Bristol, Birmingham and Cambridge.

First used in London during the summer, the innovative posters use striking images to warn both motorists and cyclists to watch out for each other.

Robert Goodwill, Roads Minister, said: “The UK has some of the safest roads in the world, but a number of cyclists are still killed or seriously injured every year and we are determined to tackle this.

“This campaign aims to make motorists aware of the need to look out for cyclists, ensuring they take extra care when turning at junctions, for example, and encourages cyclists to think about the dangers that they could be unaware of when they are riding.”

All five cities have been chosen because they have the highest rates of accidents involving cyclists outside of London.

The campaign, which launched on Monday, will run for four weeks.