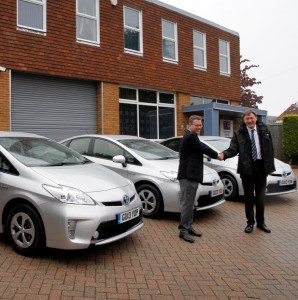 TC Facilities Management, one of the UK’s largest private contract cleaning companies, have taken delivery of their 100th Toyota Prius.

TC Facilities Management look after some of the largest high-street brands and private sector names and has been a Toyota customer for six years.

Their team of 65 area management staff use the Prius, covering approximately two million miles per annum.

The cars supplied vary between the T Sprit and T3 grade models, with the change cycle taking place every four years.

Mr Burgess said: “With over a dozen hybrid models already available in the UK, and several more models to be launched in 2013, the Prius remains our hybrid of choice.

“The Prius underpins our environmental stance of having a totally hybrid fleet across the UK.”

Mr Bays, who supplied the vehicles, added: “We have established a good business relationship with the team at TC Facilities Management built around the proven success and reliability of Prius hybrid technology.

“This track record provides reassurance for its day to day business operation as well as addressing individual business environmental policies.”

More than 2.8million Prius’ have been sold around the globe since the original model was launched in Japan in 1997.