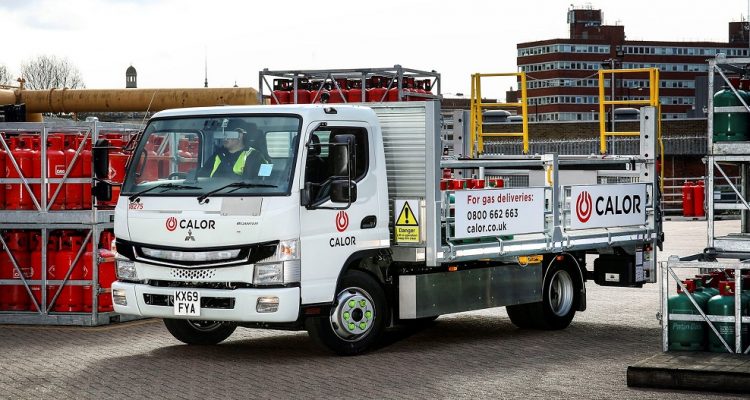 Calor plugs in with its first zero-emission FUSO eCanter

Calor is one of the UK’s best-known gas suppliers but the ground-breaking FUSO eCanter now delivering its bottled butane and propane to customers in central London relies on battery power. 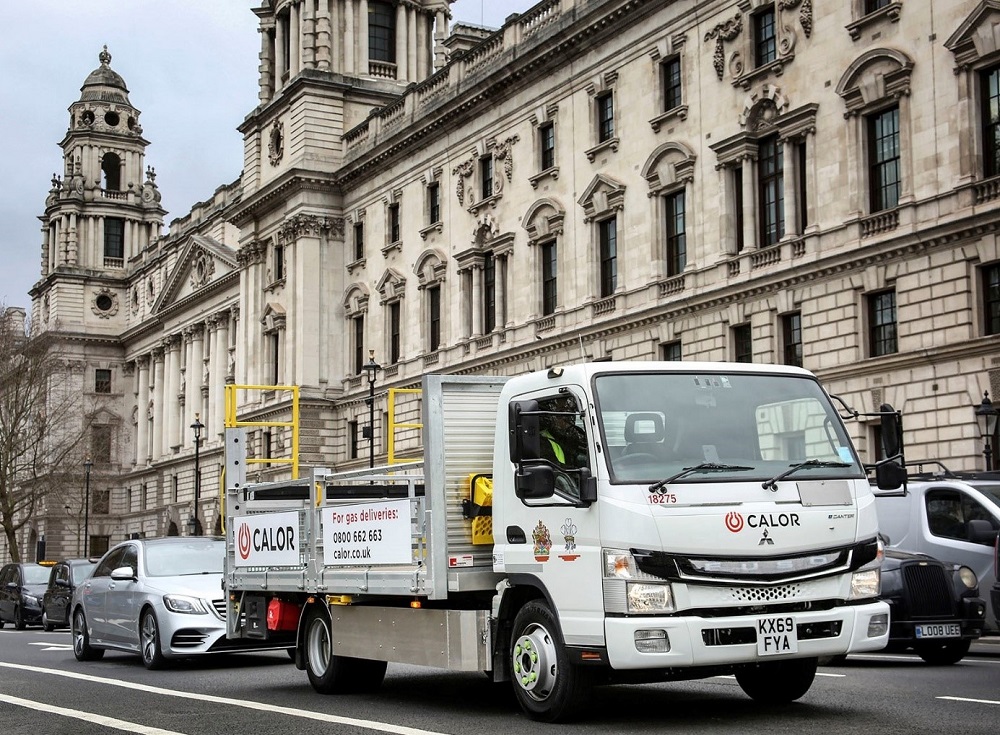 As well as producing zero exhaust emissions, the fully electric 7.5-tonner is exceptionally quiet, smooth to drive, and highly cost-effective to run.

The truck is based at Calor’s depot in Wandsworth, south-west London, and spends much of its time working inside the city’s Ultra Low Emission Zone (ULEZ).

The company’s National Vehicle Engineering Manager Alan Harrison said: “At Calor we like to move quickly to adopt any new technology that can help our business. The FUSO eCanter is a perfect example – it reduces the impact of our operations on the environment, while also making sound financial sense.”

The FUSO light truck range is sold and supported by Mercedes-Benz Trucks in Great Britain. The eCanter is the world’s first fully electric light-duty truck to enter series production and represents a major advance in the battle to improve air quality in towns and cities.

The vehicle has a body and payload allowance of up to 4.5 tonnes and offers cost savings worth as much as 1,000 Euro for every 10,000 kilometres covered, compared to a diesel-engined truck. Its electric drivetrain with permanent-magnet motor employs six 420 V and 13.8 kWh lithium-ion batteries, and delivers 129 kW (180 hp) via a single-gear transmission in the rear axle.

“Electric power is a new departure for us, so of course we’ll be monitoring the truck very closely,” continued Mr Harrison. “The environmental benefits are clear, but we are also expecting the eCanter to prove highly economical in terms of its total cost of operation. The early signs are certainly promising.”

A single charge gives the eCanter an effective operating range of more than 62 miles (100 km), which is ample for many urban delivery applications. Calor’s vehicle typically covers 30 miles a day, and its batteries are replenished overnight at a recharging point in the depot. 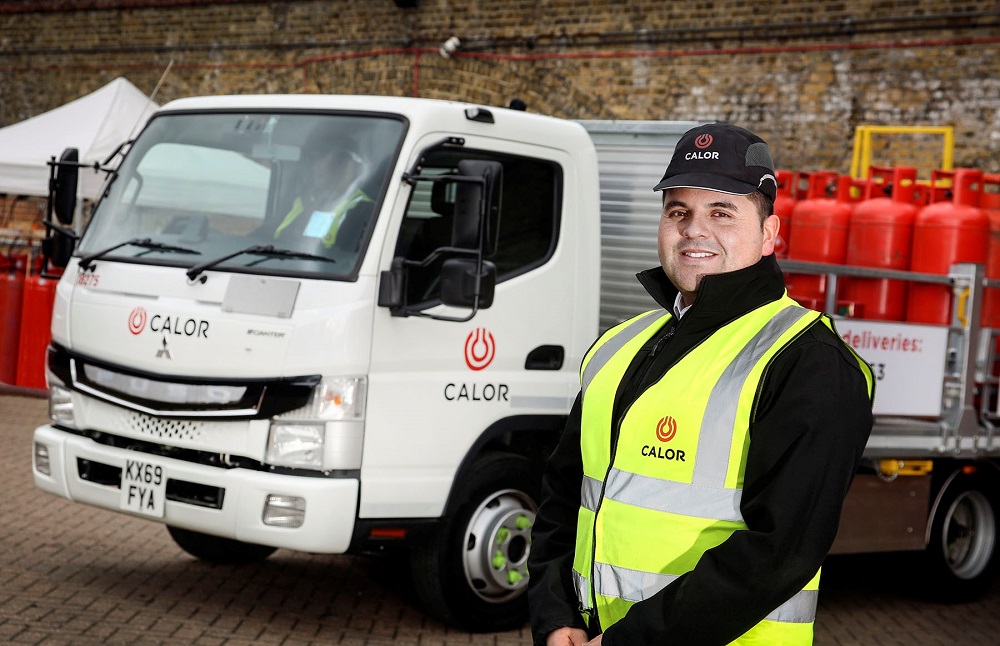 Wandsworth Site Leader David Moreno said: “It’s a great vehicle and well suited to this application. The two drivers who have used it so far have responded positively, saying it’s very easy to use.”

One of those drivers is Alexandru Nechita, who reported: “The eCanter is so smooth. The pick-up from a standing start is really strong and it pulls away easily. The lack of noise or vibration in the cab is noticeable too, and makes for a much more relaxing drive.”

Like its diesel-engined stablemate, the eCanter is also compact and agile compared to other 7.5-tonners. “The truck’s size and manoeuvrability mean it’s easy to negotiate city-centre traffic or access particularly tight locations,” he added. 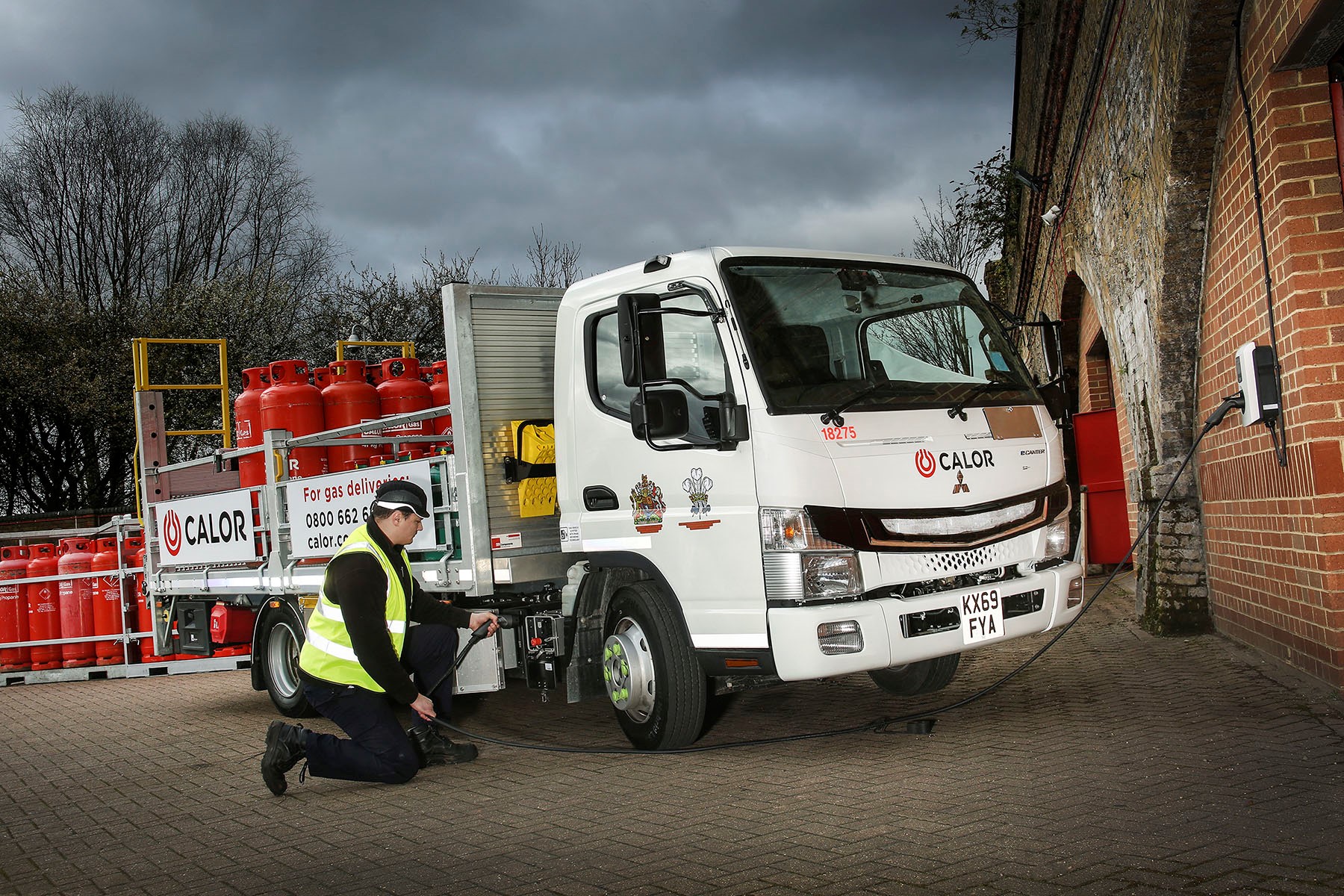 Calor’s eCanter is fitted with a dropside body with safety rails, by SB Components, of Wisbech. Typically, it leaves the depot each morning carrying a 2,370 kg load, and remains heavily laden throughout the day, as the driver collects empty gas bottles each time he drops off full ones.

The FUSO eCanter is already well proven. The first 10 vehicles were delivered to three UK operators in 2018, with a further six – including Calor’s – supplied to other customers late last year. Worldwide, there are now more than 140 eCanters in operation.

“We’re delighted with our first eCanter,” enthused Calor’s Alan Harrison. “It’s perfectly suited to inner-city deliveries. As legislation moves on, and with ultra-low emission zones becoming more widespread, as well as stricter, this important new truck can help us to future-proof our delivery operation, while also offering the reliability and competitive running costs we need.”