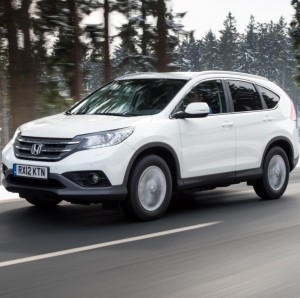 TARGET: 60% of drivers expected to be commercial

The 1.6-litre i-DTEC engine already available in the Civic will adorn Honda’s mid-sized crossover from October, with 60% of customers expected to be business drivers.

With a six-speed manual gearbox and two-wheel drive, the 1.6 diesel CR-V will have CO2 emissions of 119g/km – meaning road tax of just £30 a year.

Overall the 1.6 CR-V is 116kg lighter than the 2.2, mainly through ditching the four-wheel-drive system.

This has allowed the suspension to be retuned – improving agility and comfort – while the size of the brakes has been reduced without impairing stopping power.

The new versions will further boost Honda’s CR-V sales, which have already enjoyed a 2013 surge following the introduction of an all-new model last year.

Honda expect the new model to claim a quarter of all CR-V sales in the UK next year, boosting the total to around 17,000.