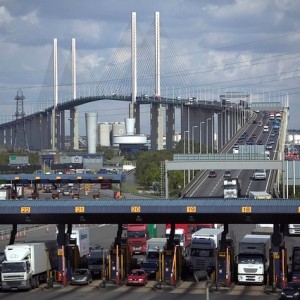 The government must act now and build a new Thames Crossing to improve capacity and ease congestion at Dartford, the Freight Transport Association (FTA) have insisted.

Government officials announced yesterday there is still no definitive answer to the location of the new crossing, with a final decision only to be made in May 2014.

However, it has been confirmed that the option of connecting the A2 Swanscombe Peninsula with the A1089 has been ruled out.

The FTA contributed to the Department for Transport consultation on behalf of their members, stating a new Thames Crossing would be integral in improving capacity for traffic at Dartford.

They added that there was an urgent and vital need to ease congestion at what is one of the most important national artery routes.

Malcolm Bingham, Head of Road Network Management Policy at the FTA, said: “FTA believes that today’s announcement brings us no closer to building the much needed new Lower Thames Crossing.

“There is absolutely no doubt that improving capacity and easing congestion at Dartford is essential.”

FTA pointed out that the introduction of free-flow tolling in 2014 will go some way to relieving the queues at the tunnels.

However, they added there would still be the requirement for new capacity, with a definite need to plan more efficiently for the future in order to cope.