BMW At The Iaa Cars 2017 In Frankfurt 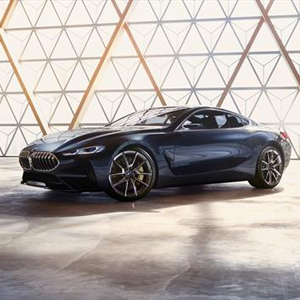 BMW is firing the starting gun on the brand’s forthcoming product offensive with an extraordinary pageant of new models and concept vehicles at the IAA Cars 2017 show in Frankfurt am Main. The company’s stand centres on its expanded luxury class line-up, captivating studies and production models in numerous segments exhibited at a public trade fair for the first time.

The new products unveiled at the 2017 Frankfurt show highlight the status of BMW as a manufacturer of vehicles that transmit unrivalled levels of emotional appeal with their inspirational design, trailblazing innovations and the driving pleasure for which the brand is renowned.

BMW is also showcasing the latest technological developments for the future of personal mobility, in which powertrain electrification, comprehensive digitalisation and other advances in the field of automated driving will play a particularly important role.

Hall 11 at the main entrance to the Frankfurt trade fair site has been prepared for the shared BMW, MINI and BMW Motorrad stand, and serves as a forum for current and future highlights of the product range.

This is where the new products and features from all the brands will be presented under the slogan “This is tomorrow. Now. Die Zukunft ist jetzt”. The exhibition space covers an area of over 10,500 square metres and has a circuit running around it that is about 150 metres long.

This will give visitors to the Frankfurt Motor Show on 14 – 24 September 2017 the opportunity to experience the new models in action too.

Both the BMW Concept 8 Series and the BMW 7 Series Edition 40 Jahre are testimony to BMW’s expanded presence in the luxury segment. Other facets of driving pleasure are demonstrated at the 2017 Frankfurt show by the BMW Concept Z4, the new BMW 6 Series Gran Turismo and the new BMW X3 respectively – including exhilarating open-air fun, elegance and longdistance comfort, not to mention multi-faceted sportiness.

BMW Motorrad is also placing the spotlight on the intensely emotional and sustainable sides of mobility in Frankfurt. The BMW Motorrad Concept Link, boasting an all-electric drive system and state-of-the-art connectivity technology, are joined by numerous other pioneering ideas for urban mobility in tomorrow’s world.

Dynamism, luxury, allure: the BMW Concept 8 Series.
The BMW Concept 8 Series gives visitors to the IAA Cars 2017 show a taster of a new model from the brand due for launch in 2018: the BMW 8 Series Coupe. The study is the epitome of dynamism, luxury and exclusiveness – the quintessential qualities of a modern-day BMW coupe. As Chairman of the Board of Management of BMW AG Harald Krüger explains: “The forthcoming BMW 8 Series Coupe will demonstrate that razor-sharp dynamics and modern luxury can go hand-in-hand. This will be the next model in the expansion of our luxury-car offering and will raise the benchmark for coupes in the segment.”

The BMW Concept 8 Series reveals much of what is to come. Classic styling features combine with new design ideas. Crisp lines that mark out clear surfaces and the car’s powerfully sculpted volumes together form a powerful proclamation of uncompromising sportiness. The silhouette of the BMW Concept 8 Series is composed of its long bonnet, flowing roofline and the striking upward sweep of its trailing edge. The styling of the interior and the choice of materials echo the purposeful interplay between dynamism and luxury. The lines in the cockpit area gravitate forwards, reinforcing the focus on the task of driving. Merino leather, a faceted ground gearshift lever and an iDrive Controller made from Swarovski glass with a smoky quartz look give the interior an exclusive air.

A new take on the roadster: the BMW Concept Z4.
The BMW Concept Z4 is revealed at the IAA Cars 2017 as a statement of unbridled driving pleasure. This design study likewise offers a look ahead to a series-production version of the car set to be unveiled over the course of next year. A shorter bonnet and crisp overhangs ensure the driver sits closer to the middle of the car than in previous BMW roadsters. The surfaces and forms of the BMW Concept Z4 create a modern and emotionally engaging impression. The large Air Breathers rearwards of the front wheels act as the source of the BMW Media Information 08/2017 Page 3 flanks’ elaborately modelled surfaces, which appear to have been shaped by the flow of air as it exits the Air Breathers. The appearance of the front end sparks associations with classic roadster models from BMW. The styling of the BMW kidney grille is reminiscent of the BMW 328 Mille Miglia. Its broad outline and low-set positioning instil a sense of flamboyance very much in the mould of the BMW Z8. In a first for BMW, the Concept Z4 provides a vertical interpretation of the four-eyed headlight look, with two light sources placed one on top of the other on each side. The bonnet curves over the wheels, creating an intriguing and virtually seamless sweep over the front end as a whole.

The fluent transition between exterior and interior is clearly visible from both the styling and colour scheme of the BMW Concept Z4. Much of the interior adopts the colour of the car body, with just the driver’s cockpit standing out in an all-black finish that reinforces the focus on the driving experience.

Looks, long-distance comfort and practicality: the new BMW 6 Series Gran Turismo.
The new BMW 6 Series Gran Turismo serves up a sensational blend of alluring coupe style, luxurious long-distance comfort and flexible practicality. The systematic evolution of this body format is particularly evident in both the new luxury-class model’s sporting elegance and its superior dynamism. Inside, the driver-focused cockpit layout is generously sized, with a raised seating position. The rear compartment comprises three full-size seats, while the boot capacity can be increased from 610 to a maximum of 1,800 litres.

Intelligent lightweight engineering has led to an average 150 kilogram weight saving over the outgoing model. Together with the considerable improvement in the car’s aerodynamic properties, the increase in power and the superior efficiency of the engines, this ensures both sportier performance and greater fuel economy.

The most innovative mid-size SAV around: the new BMW X3.
The new BMW X3 is set to write the next chapter in the success story of this mid-size SAV (Sports Activity Vehicle) with an even more striking, dynamic design language, powerful yet also efficient drive systems and luxurious appointments. The third generation of the BMW X3 follows in its predecessors’ tyre tracks by combining rugged off-road looks with a sporting presence. Comfort levels can be further elevated by a host of new equipment options like three-zone automatic climate control, the Ambient Air package, active seat ventilation and the panoramic glass roof.

The engines’ increased efficiency benefits both the sportiness and fuel economy of the new SAV, as does the intelligent lightweight design, which BMW Media Information 08/2017 Page 4 has lowered the car’s weight by as much as 55 kilograms compared to the predecessor model. The new BMW X3 also boasts class-beating aerodynamics with a drag coefficient (Cd) of 0.29.

Yet more driving pleasure and zero CO2: the new BMW i3 and new BMW i3s.
The world’s best-selling electric car in the premium compact segment now comes with refreshing styling accents, cutting-edge equipment features and new digital services to make locally emission-free driving even more enjoyable. And the BMW i3 has now been joined by a second model variant. With a higher output, model-specific chassis technology, noticeably more dynamic driving qualities and design features all of its own, the new BMW i3s brings out the sporty side of electric mobility more vividly than ever.

The agile handling characteristics of both models are improved still further by the optimised Dynamic Stability Control (DSC) system. Other new features in the BMW i3 and BMW i3s include the On-Street Parking Information service, the unique BMW Digital Charging Service and the BMW Connected personal mobility assistant.

This development takes the high-performance sedan into a new dynamic dimension and endows it with additional everyday usability in all driving conditions. The electronically controlled, fully-variable distribution of power between the front and rear axle links up with the Active M Differential, which likewise works fully variably and provides a locking effect between 0 and 100 per cent at the rear axle. The result: the power generated by a 441 kW/600 hp V8 bi-turbo engine with M TwinPower Turbo technology is delivered to the road to majestic effect. The new BMW M5 accelerates from 0 to 100 km/h (62 mph) in 3.4 seconds.

The model-specific design features of the new BMW M5 include a roof made from carbon fibre-reinforced plastic (CFRP). The weight saved through the integration of the CFRP roof and other components (e.g. the exhaust system) help to ensure that the new BMW M5 with M xDrive all-wheel drive is lighter than the model it replaces.

En route to Le Mans: the new BMW M8 GTE.
BMW Motorsport is using the IAA Cars 2017 show to present its new flagship contender for international GT racing: the BMW M8 GTE. The new racing car will line up in competitions including the FIA World Endurance Championship over the coming season and therefore make its debut in endurance racing ahead of the market launch of the new BMW 8 Series Coupe. Among the races on the car’s schedule is the legendary 24 Hours of Le Mans.

The V8 engine with BMW TwinPower Turbo technology, which is restricted by regulations to a displacement of 4.0 litres, is derived from the seriesproduced unit and has a nominal base output of more than 500 hp, depending on the classification. Intelligent lightweight design brings the weight of the new BMW M8 GTE down to approximately 1,220 kilograms.

The BMW 7 Series Edition 40 Jahre models are being produced in a limited quantity of 200 units and tailored to individual customer specifications at BMW’s Dingolfing plant. Eye-catching BMW Individual special paint finishes in the variants Frozen Silver metallic and Petrol Mica metallic give the exterior of the car an alluring appearance. And among the key contributors to the exclusive ambience inside the car is BMW Individual full leather trim Merino fine grain in the colour combination Smoke White/Cohiba or Smoke White/Black.

Relentless progress on the road to automated driving.
Ever increasing driving automation is playing a central role in the major changes taking place in personal mobility. The BMW Group is committed to expanding its development expertise in the field of automated/autonomous driving. Here, the company can call on its many years of experience and wellfounded pool of knowledge, as well as the expertise of strong partners.

Urban mobility, re-thought: the BMW Motorrad Concept Link.
BMW Motorrad is presenting a design study for a new vehicle segment at the Frankfurt show, as well as a future vision of urban mobility on two wheels. The BMW Motorrad Concept Link generates zero local emissions, is sporty and agile, and offers innovative functionality and digital connectivity. This concept vehicle links the digital and analogue worlds and serves as both a means of transport and a communication device.

The fuel consumption and CO2 emissions figures shown were determined according to the European Regulation (EC) 715/2007 in the version applicable at the time of type approval. The figures refer to a vehicle with basic configuration in Germany and the range shown considers the different size of the selected wheels and tyres.

The CO2 efficiency specifications are determined according to Directive 1999/94/EC and the Pkw-EnVKV, and based (for classification) on the fuel consumption and CO2 values as per the NEDC cycle.