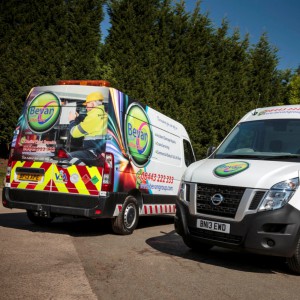 Leading vehicle bodybuilders Bevan Group are investing in a 20-strong fleet of Nissan NV400 for use by their national network of mobile technicians.

The 3.5tonne GVW front-wheel drive 125PS NV400 fleet will be used as mobile workshops to maintain and repair all makes and models of truck and van bodies.

Signed on a three-year, 105,000-mie deal, they will also be used to maintain and repair ancillary equipment such as tail lifts, cranes and roller shutter doors.

Bevan Group chose Nissan ahead of vehicles from three other leading manufacturers after an extensive test drive programme led by the mobile technicians.

Simon Dryburgh, Aftercare Manager at Bevan Group, said: “By the end of July we’ll have 20 new Nissan vans on the road, that’s six more than we ran previously reflecting the growing demand for our aftercare services.

“The vans are critical for us to help keep our clients’ vehicles on the road.

“Our team of technicians were impressed with all aspects of the NV400.

“From a company perspective reliability and running costs are very important and we believe the NV400 will deliver across all of these areas.”

They are also kitted out in striking liveries, acting as a high-profile mobile billboard for Bevan Group as its technicians travel the length and breadth of the country.

Brian Bachelor, Fleet General Manager at West Way Nissan said: “It is testimony to the NV400 that it meets the exacting needs of both Bevan and its drivers.

“This investment shows the confidence that Bevan has in the Nissan van.”