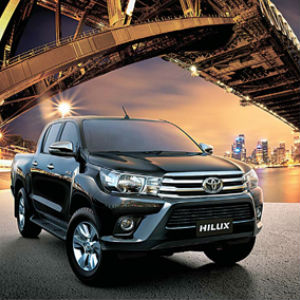 Each month, Glass’s commercial vehicle editors hold a meeting to name the current Used Van Hero in the UK market – the model they believe offers outstanding value, quality and ability.

Andy Picton, Senior Commercial Vehicle Editor: “More than any other commercial vehicle in the world, the Hilux is recognised for the fact that it will just keep going, no matter how much it is abused. For people who place reliability and the ability to drive anywhere above all other considerations, it is the perfect buy.

“Long before Top Gear tried to blow up a Hilux, it was already seen by the market as almost indestructible and the number one pickup for serious use, so residual values tend to be strong. A used example isn’t cheap but then you are buying something that you can almost guarantee will never let you down.”

Andy added that the only downside tended to be quite high running costs on older examples.

“Official Toyota parts for the Hilux aren’t cheap and the servicing intervals on earlier models are frequent. However, this is part of the price you are paying for its unrivalled durability. There are very few vehicles you can recommend without hesitation but, for the right buyer, the Hilux is one.”

WHY? Great reliability and durability. Proved to be almost indestructible on a top TV motoring show. Has stood the test of time.

WHEN WAS IT ON SALE? The first generation Hilux left the production line in 1968. With the recent launch of the all-new pick-up, it is now in its eighth generation.

WHAT’S GOOD? Worldwide, the Hilux has the best of reputations. A vehicle built for proper off-road use, durable in all conditions and powered by a rugged and reliable diesel engine. It is also a commanding presence on or off road.

WHAT’S BAD? Original manufacturer parts can be expensive. Older examples have reduced servicing schedules. The latest generation currently only offers one engine output at 150bhp, which is plenty as a workhorse but may put off some buyers looking for a lifestyle pick-up.

IDEAL BUY? Hilux Invincible 4×4 3.0 D-4D 171bhp double cab pick-up on a 12 plate at £11,500 plus VAT. However, standard spec is still relatively basic compared to the competition, so be prepared to pay more and source one with options such sat nav, a load liner, reversing camera and a canopy.