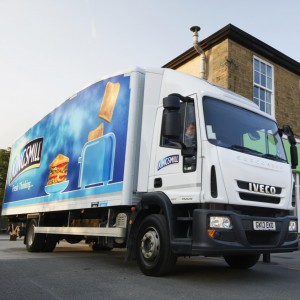 Allied Bakeries are supporting a major new nationwide contract with the acquisition of 73 new Iveco Eurocargos.

Their sleek profile is further enhanced by bespoke wind deflectors and cab collars, provided by Don Bur as part of their aerodynamic bodywork package.

The vehicles will be used for multi-drop urban distribution to smaller retailers, as well as deliveries to major multiples.

Each vehicle has been carefully specified for its ability to transport up to 540 baskets of bread, carrying out a number of drops every day.

Chris Davies, Fleet Engineer at Allied Bakeries, said: “We put this order out to competitive tender and Iveco came out top based on the Eurocargo’s competitive whole life costs.

“We operate a fleet of more than 1,000 commercial vehicles, and the aftersales care on our Ivecos has been second to none.”

Allied Bakeries began specifying 14-tonners for their fleet several years ago, and Mr Davies added that the vehicles suit the company’s requirements perfectly.

“Unladen chassis weight has gradually increased on all marques of commercial vehicle with the introduction of new technology and emissions legislation, so we took the decision to step up from 12tonne rigids to 14tonners,” he added.

“It suits our business and the types of deliveries we make, whilst cutting down on vehicle journeys.”

Each of the new Eurocargos will cover in the region of 40,000 miles per annum, on the road seven days a week.

Like all 4×2 models in the Eurocargo range, the 140E18Ps  feature a two-pedal automated EuroTronic transmission as standard, complete with a fuel-saving software control package.

The new fleet is even cleaner than current Euro V, with vehicles featuring an engine immobiliser as standard, together with a driver programmable speed limiter up to 90km/h.