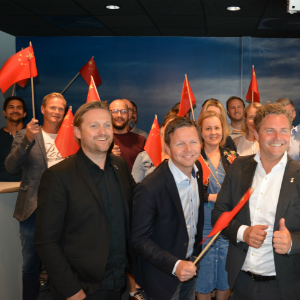 ABAX has taken its first major step outside of the European market by opening an office in China.

In a sign of its ambitions and optimism about future growth, the vehicle technology company has opened the office in the city of Nantong in Jiangsu province.

The office will serve as a base for Norwegian-owned ABAX – which has a UK head office in Peterborough employing 50 people – to establish its brand in China and sell its vehicle telematics in the Chinese market.

ABAX China Ltd’s Chief Executive will be Anfinn Hammer Feng, who has a thorough and first-hand knowledge of the Chinese market and has helped several other Norwegian companies in the past.

ABAX Group Chief Executive Petter Quinsgard said: “The Chinese market is very interesting to ABAX in terms of its size and potential.

“In spite of cultural and structural differences between Europe and China, we see the same challenges that owners of company vehicles are facing in terms of savings, mileage claims and documentation to the authorities.

“The competition in our line of business is very tough and changes in the market occur very quickly. Despite this, we are one of just a few businesses who manage to grow with the market and still be profitable.

“We are ready to first grow in Nantong and steadily spread our business to the rest of the Chinese market.”

ABAX will launch its main products in the Chinese market from August. The products will be the electronic Triplog solution alongside its fleet management and GPS tracking solutions for machinery and equipment. New products will then be launched later in 2016.

The company currently operates in Norway, Sweden, Denmark, Finland, the Netherlands and the UK. Its UK head office is at the Allia Future Business Centre, ABAX Stadium, Peterborough.

ABAX UK Chief Executive Chris Miller said: “This move outside of Europe really shows the ambition of ABAX and our confidence that we have the right products and technology to help an increasing number of markets, like we are seeing in the UK.”