The M3 in Surrey and Hampshire has become the latest road in the UK to be upgraded to a smart motorway, Highways England announced today (Tuesday 1 August).

Cutting-edge technology installed on a 13.4 mile section of the motorway between the M25 and Farnborough sets the speed limit to match conditions, helps spot any queuing traffic, incidents or broken down vehicles, and informs drivers about conditions ahead.

The hard shoulder has been converted to a new fourth traffic lane in each direction, boosting capacity by a third on the vital route between London and the South West.

Since it was created in April 2015, Highways England has completed 16 major improvements, with a further 15 upgrades due to be started or open by spring 2018.

Drivers in this morning’s peak period were the first to benefit from the fully upgraded road. Main construction on the project was completed overnight on 30 June, when the fourth lane was available for use with a 50mph speed restriction remaining in place, whilst testing of the smart motorway technology was finalised. Now, the full four lanes are open at 70mph, with the smart motorway technology detecting incidents, actively managing traffic and giving drivers information.

“This is a significant upgrade for the M3 and will deliver real benefits for the 130,000 drivers who use it every day. We’ve added 26.8 miles of new lanes to this busy section of the M3 and completely overhauled the technology to give drivers better information to help with their journeys.

“As well as the smart motorway upgrade, we have also been carrying out the most extensive maintenance on the M3 since it was first built in 1971, fully resurfacing the motorway and its slip roads and restoring it to an ‘as new’ condition.”

“I would like to thank drivers for their co-operation and understanding while we’ve been building this new improved road and hope they enjoy the improved journeys between London and the south coast.” 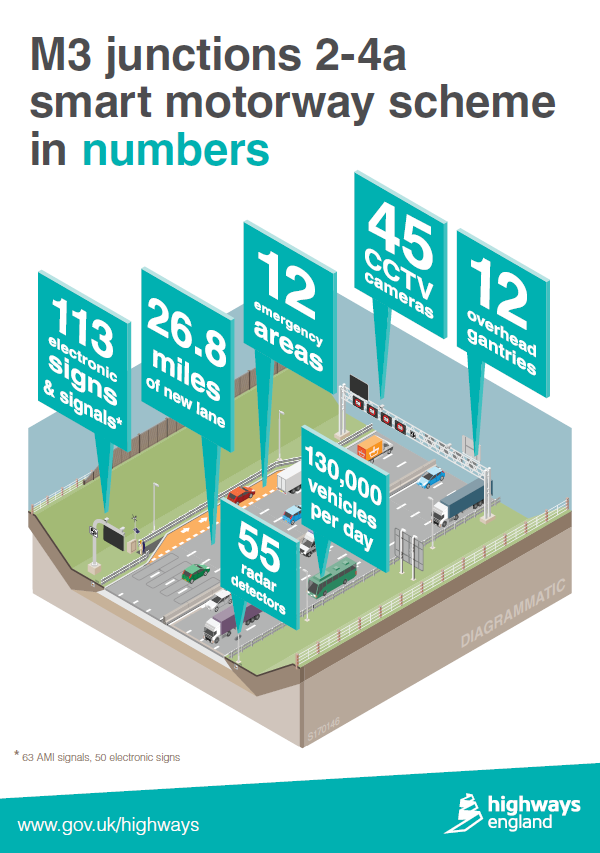 Caption: A summary of the new technology installed on the smart motorway

Smart motorways have been designed to be intuitive to drive on. Normal motorway rules apply: keep left unless overtaking, drive within the speed limit and never drive in a lane closed by a Red X. Even without a hard shoulder, there are safe places to stop every 75 seconds of driving on average.

Work on the smart motorway upgrade started in November 2014. Major maintenance being carried out alongside the project is also substantially complete, but some activities – including the rebuilding of the Woodlands Lane bridge over the M3 near Windlesham – will continue until later in the year. None of this maintenance will require any permanent traffic restrictions on the M3.