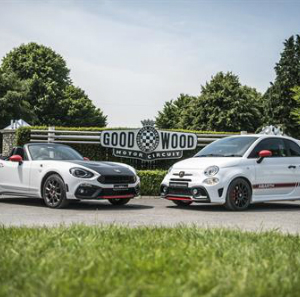 The eagerly-awaited Abarth 124 spider will be among the star cars of the show when it makes its UK dynamic debut at this week’s Goodwood Festival of Speed.

The two-seater roadster, which has already attracted critical acclaim from the UK automotive press,  will be joined at Goodwood by the new Abarth 595 Competizione, the top-of-the-range version of the brand’s striking new 595 range, which has just been launched in the UK.

The 170hp 124 spider will be seen ‘on the move’ for the first time in the UK as it makes its way up the famous Goodwood estate’s Hillclimb. The car is one of a classic combination of new and historic vehicles that are being brought by Abarth to this year’s event (23-26 June).

The iconic ‘Scorpion’ brand has also prepared an exhibition stand in the ‘Moving Motor Show’ at the West Sussex festival, on which show-goers will be able to view both the new Abarth 124 rally and the historic Fiat 124 Abarth Rally.

Abarth 595 range
The new Abarth 595 follows on from the original model launched in 2008, and takes it to the next level, with a new design, greater performance and enhanced equipment. Available as a hatchback or convertible, the new Abarth 595 is offered with three trim levels: 595, 595 Turismo and 595 Competizione, and three power levels to satisfy the requirements of Abarth enthusiasts. The range starts at £15,090 OTR for the 1.4 TJet 145hp Manual.

Abarth 124 rally
Presented for the first time in March at the Geneva Motor Show and then at the 100th Targa Florio, the Abarth 124 rally is making its debut in the UK at the Festival of Speed. Under the bonnet is an 1800cc turbocharged direct injection dual overhead camshaft engine which, thanks to the different selectable mappings, can provide up to 300 hp at 6500 rpm.

Abarth is releasing a special video bringing together the Abarth 124 spider and the Fiat 124 Abarth Rally which inspired it. The video is due for launch on the eve of the Festival of Speed (23 June). To see it, enthusiasts should log into Abarth’s Facebook and YouTube channels:

“The Goodwood Festival of Speed is a spectacular celebration of motoring, drawing car fans from all over this country and Europe to view the past, and see what is coming next,” says Gerry Southerington, brand manager, Abarth UK. “So what better event for the Abarth 124 spider to make its dynamic UK debut?

“We can’t wait to see the crowd’s reaction as this fantastic car takes to the famous Hillclimb for the very first time. It will also be a treat for rally fans when they see both the historic and the new 124 rally cars.”