How monitoring tyre pressures can save fleets thousands 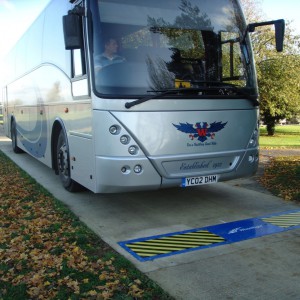 MONITOR: Your fleet could save thousands…

Global CO2 emissions from fossil fuels reached record levels in 2012, with road transport accounting for around 10% of the carbon footprint.

The industry dedicates vast resources to reduce CO2 by just a few percentage points and it has been proven that minor adjustments to a vehicle can have a surprisingly large effect on fuel consumption and emissions.

One such adjustment that should be an essential aspect of vehicle maintenance is to ensure that vehicles entering and leaving a site are monitored automatically for tyre pressures.

When tyres are inflated to the correct pressure for the load being carried, they will decrease a vehicle’s rolling resistance, helping it travel further on each tank of fuel, which in turn will help to reduce the amount of CO2 emissions produced.

However, if tyres are under-inflated, even by just a small amount, the cost implications can be staggering.

Studies have shown that each year, global tyre under-inflation is responsible for more than 20million litres of unnecessary fuel consumption, more than two million tonnes of CO2 going into the atmosphere and around 200million tyres reaching the end of their life prematurely.

This particular scenario helps to highlight the potential environmental and cost savings involved.

If the tyre pressures are correct, the vehicle could save around 2% in fuel and 10% on the tyres.

This equates to an annual saving of £1,380 per vehicle.

When scaling this up over a fleet of vehicles, the cost savings, as well as the environmental savings, mean that monitoring tyre pressures is critically important.

Running under-inflated tyres is also a significant factor in causing their premature failure, resulting in hefty replacement costs, as well as more waste being sent to landfill.

Tyre manufacturers estimate that on average, 43% of all tyres in operation are running at 10% below the recommended level, which leads to a 16% increase in wear rates.

For the commercial vehicle market, it has been found that more than 7% of all tyres are running at least 20psi under manufacturers’ recommended inflation pressures.

Considering these statistics, it is clear to see that a vast number of tyres are unnecessarily dumped prematurely.

In addition, as tyres begin to break down due to the added bend and flex caused by under-inflation, minute pieces of rubber particulates are released into the air, causing particulate pollution and harming the environment.

Correcting a vehicle’s tyre pressure will not stop climate change but as commercial traffic accounts for 30 to 40% of total carbon dioxide emissions from road transport, it is another small but significant step towards a lower carbon future.