The Volkswagen Crafter is the cleanest Euro 6 van tested based on real-world emissions, but the Mercedes Citan emits 17 times more pollution, yet both vehicles conform to the laboratory-based legal standards. 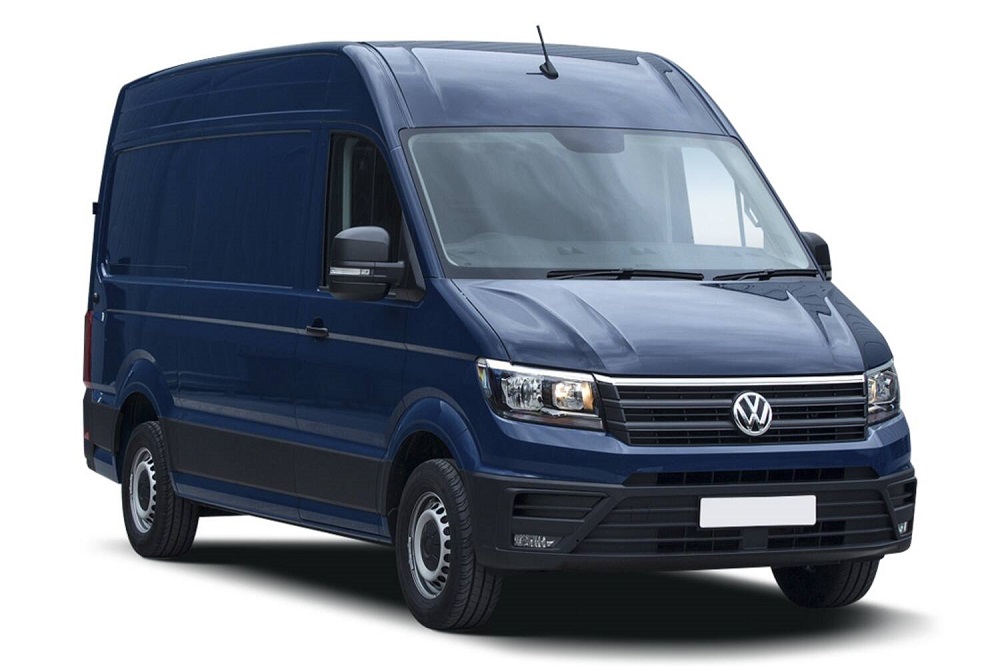 Those are some of the latest findings from the AIR Index, an international, independent and standardised rating system that reveals accurately how much pollution a vehicle produces when it is used in towns and cities. The AIR Alliance commissioned tests for ten of Europe’s best-selling diesel light commercial vehicles using scientifically robust, on-road vehicle testing according to the latest CWA17379 methodology to give each vehicle a simple A-E colour-coded AIR Index rating, showing the difference between clean and dirty vehicles.

Volkswagen’s 2018 Caddy C20 Highline TDI 2.0 litre and Peugeot’s 2019 Partner Asphalt 1.6 litre both get an ‘A’ rating, as their on-road emissions fall below the 80 mg/km laboratory-based light van limit.

In terms of urban road traffic, van emissions have a major impact on air quality simply because they are used far more than cars. The average parcel van travels between 20,000 and 30,000 miles a year, while grocery home delivery vans can cover up to 50,000 miles per annum. Vans are also the fastest-growing traffic segment, accounting for 70 per cent of the growth in road-miles over the last 20 years. As internet shopping continues to grow, so do light van sales and their use on our roads. Every day there are 65,000 unique LCV journeys into London alone and vans contribute 15 percent of London traffic – and a higher proportion of diesel vehicular traffic.

As AIR noted at the launch of the AIR Index for cars earlier this year, a number of Euro 6 cars still emit significantly more NOx on the road than in the laboratory test used for their type approval and there is huge overall variation between cars despite them all complying with in-laboratory Euro 6 emissions standards.

Created to inform and empower consumers, owner-drivers, fleet operators and policy makers with the real facts about emissions when making choices about vehicle purchase and usage, the AIR Index is a vital tool in helping to clean up urban air quality.

The results of the vans tested for AIR and rated on the AIR Index are: 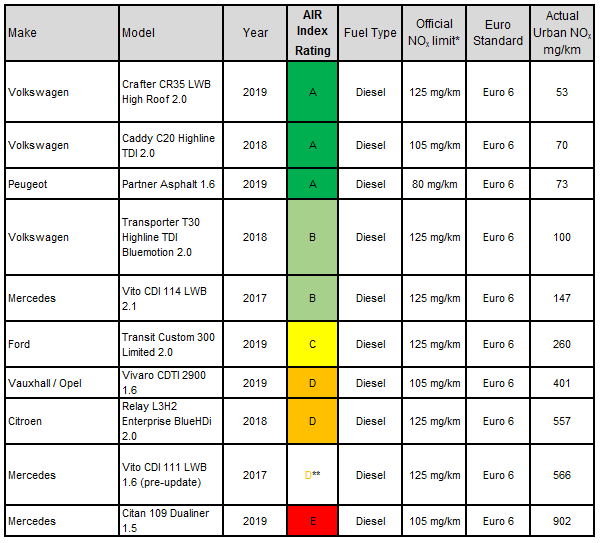 The power to dramatically and rapidly to improve emissions from dirty vans lies within the hands of the manufacturers. For example, AIR found that when it commissioned tests of the Mercedes Vito CDI 111 LWB 1.6, a simple manufacturer-led update of the vehicle’s emissions management system halved the NOx emissions when tested again.  This would be the equivalent of improving the AIR Index rating from ‘D’ to ‘C’.

AIR carries out an ongoing programme of vehicle testing and more results will be added to the AIR Index periodically.

Inspiration for the AIR Index has been NCAP, the independent vehicle-safety rating system developed in the US in the 1970s that became the industry standard in the EU and around the world. The programme held car makers accountable for their safety performance, resulting in a voluntary adoption of technologies that led to safer vehicles.

Massimo Fedeli, Co-founder and Operations Director, AIR said: “Light commercial vehicles play a vital role in moving goods quickly and efficiently around our cities and beyond. With the growth in internet shopping and the general Amazonisation of retail, they are an ever-increasing part of our transport network and it’s crucial that only the cleanest vans are allowed to enter urban areas.

“As the AIR Index revealed when we tested the real-world NOx emissions of passenger cars, there is a shocking variation in actual emissions compared with the official results based on laboratory tests.

“AIR is calling on cities to supplement the use of Euro 6 standards for low emission zone entry – such as London’s own ULEZ – with the AIR Index database of real-world emissions results, to identify the dirtiest vans which are otherwise slipping through the net. By doing so, we believe the AIR Index could very quickly bring most European cities in line with air quality targets.”

Nick Molden, Co-founder of AIR, said: “The results of these van tests for the AIR Index continue to hammer home the fact that current policy can’t do enough to prevent damage from high emitters and treat low emitters more fairly. This is impacting air quality across in cities across Europe and is potentially costing many thousands of lives. The AIR Index gives policy makers and fleet managers information they’ve never had before enabling informed decisions about the consequences of vehicle choice.

“The 10 Euro 6 diesel vans we tested represent just under half of the annual sales across Europe. If just those rated D or E were prevented from entering the centre of urban areas the AIR Index could bring all European cities into air quality compliance.

“But the ultimate responsibility to implement change lies with the manufacturers. With simple service-led engine management updates, it is possible to make vans much cleaner, dramatically reducing emissions immediately.”