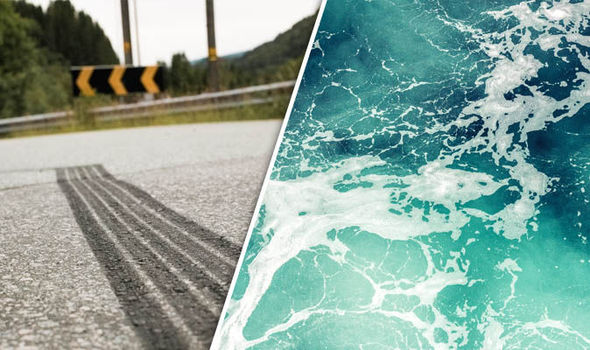 Up to 19,000 tonnes of microplastic pollution could be entering UK waterways every year from vehicle tyres, says a new report for Friends of the Earth published today [1,2].

The environmental campaign group is calling on the government’s resources and waste strategy – expected later this month – to include measures for tackling microplastics as part of a comprehensive action plan.

Vehicle tyres shed tiny bits of plastic (a mixture of natural and synthetic rubber, and well as various additives) during driving, and are believed to be responsible for the greatest proportion of microplastic pollution entering EU surface waters [3].

Microplastics can also absorb and concentrate toxic pollutants from the surrounding seawater, making them even more poisonous to animals that mistake them for food or absorb them through their gills and skin.

Last month (October) new research revealed that plastic had been discovered in the faeces of people who took part in a Europe-wide study [4].

Friends of the Earth’s new report – Reducing Household Contributions to Marine Plastic Pollution – estimates that between 9,000 and 32,000 tonnes of microplastic pollution enter UK waterways each year from just four sources. This figure is of the same magnitude as large plastic waste (estimated to be between 10,000 and 26,000 tonnes), such as plastic bottles and takeaway containers, that’s estimated to enter UK waterways annually.

The report looks at four key sources of microplastic pollution and estimates that [5]:

Friends of the Earth is urging the government to consider a number of measures to tackle tyre car pollution, including:

The environmental campaign group is also urging industry and ministers to do far more to address the torrent of microplastic pollution pouring into our environment every day. Friends of the Earth is calling on the government to introduce a Plastics Pollution Action Plan. The plan should aim for near zero plastic pollution by 2042, beginning with the phase-out of unnecessary plastics and the setting up of an expert Committee on Plastics Pollution to advise ministers.

“It’s staggering that so little is being done to prevent thousands of tonnes of microplastic pollution from car tyres, clothing and paints pouring into our rivers and seas every year.

“Microplastic pollution may be largely invisible, but it’s having a potentially devastating effect on our natural environment – especially as it can be mistaken for food by some our smallest ocean creatures, which are then eaten by bigger creatures as part of the food chain.

“Ministers are right to be concerned about the impact of bags, straws and single-use coffee cups on our environment, but we mustn’t ignore the threat from tiny bits of plastic too.”

The Eunomia report also identifies a list of 10 consumer items that are causing plastic pollution and which should be a priority for action by households, business and government. The report suggests a number of steps that need to be taken to cut pollution (along with relevant page number). A summary of the items listed below can be found on pages IV, V and VI). Friends of the Earth is urging the government to act on these items too.

Friends of the Earth, Tyre Pollution
Pin It
Tweet