A breath of fresh air

People in one of the UK’s pollution hotspots will be able to breathe air that’s as clean as that found at Peak District National Park this summer[1], thanks to a new fleet of black cabs that have been fitted with innovative air cleaners, containing unique patented nano carbon filtration technology. This technology works to remove up to 97 per cent of particulate matter (PM2.5) and up to 95 per cent of nitrogen dioxide (NO2) from the air inside the cab within ten minutes. A fleet of Barclays Air cabs is bringing Londoners a breath of fresh air thanks to Airlabs’ unique air cleaning device which removes up to 95% of pollutants. The cabs will be free for the public on the 3rd and 4th July.

Ten electric cabs will hit London today, showcasing the technology in one of the most polluted cities in the UK. All cabs have been fitted with cutting-edge air filtration technology from Airlabs, the world’s leading pioneers in clean air technology, as recent statistics reveal that forty towns and cities in the UK are breaking World Health Organisation guideline limits for fine particle pollution.[2]

Created as part of a new partnership between Barclays and Airlabs, the ‘Barclays Air cabs’ will be available for hire on London’s roads for twelve weeks this summer – so Londoners can get a lungful of fresh air.[3]

The World Health Organisation guideline safety limit for annual Nitrogen Dioxide (NO2) exposure is 40 µg/m3. When tested in the Barclays Air cabs, pre-filtered air peaked at 111 µg/m3 NO2 inside the cab.

After minutes of using the air cleaning device, the air inside the cab dropped to as low as 5.7 µg/m3 NO2 – as clean as the air in the Peak District National Park, which averages 7 µg/m3 NO2.[4]

Matthew Johnson, Chief Science Officer and Co-Founder of Airlabs said: “We’ve witnessed worryingly high levels of toxic pollution in cities across the UK in recent years, and the concern is only growing for those living and working in pollution hot spots – with London being one of the worst. An ever-increasing number of people are exposed to unhealthy pollution levels”.

“With the help of Barclays, we’re able to continue to grow as a business and commit ourselves to reducing people’s exposure to air pollution by developing new technologies and new solutions. Without the support of businesses such as Barclays, we wouldn’t be able to achieve the growth and scale that is needed for us to have the greatest possible impact on the quality of the air that people around the world breathe.” 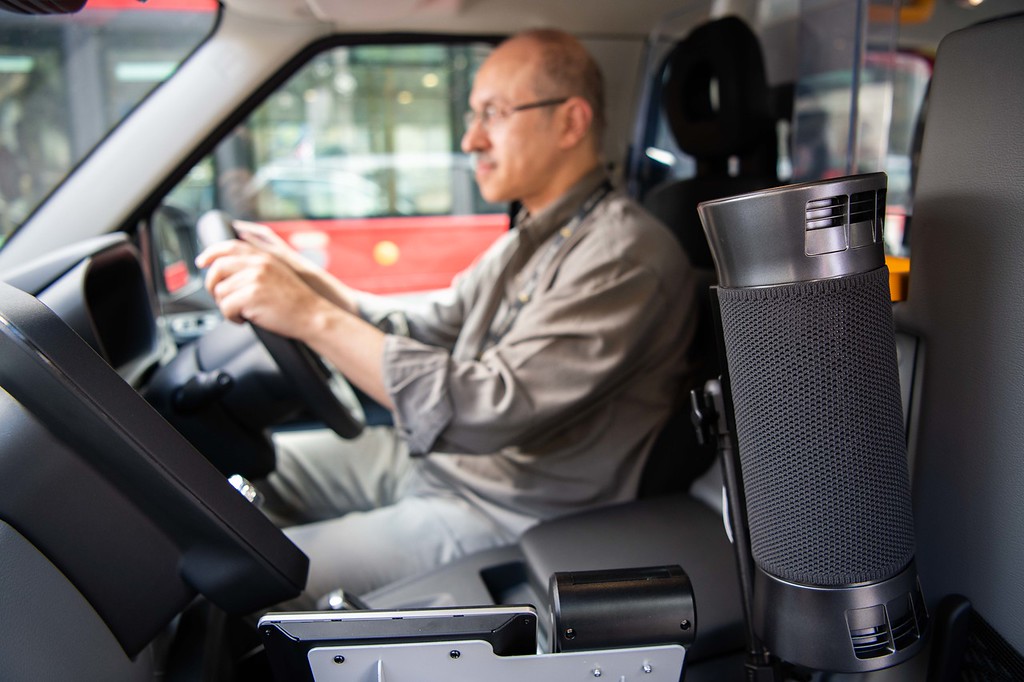 Michael Albert, a Barclays Air cab driver, enjoys air as clean as Peak District National Park thanks to Airlabs’ innovative air cleaner fitted in their cab for 12 weeks this summer.

Michael Albert, London cab driver says: “My cab is essentially my office – and knowing that I could be spending my working day in dangerous levels of pollution is really concerning, not just for me but also for my passengers. When the weather gets warmer over the summer and more people visit London, pollution can become a real issue and I’m really pleased that these filters can bring a breath of fresh air to the centre of our great city.”

Juliet Rogan, National Head of High Growth & Entrepreneurs at Barclays says: “Our job at Barclays is to back UK businesses by helping them grow, and we know that great businesses are often created by coming up with ways of solving the important problems that people really care about, such as air-pollution.

“This is why we’ve launched our new fleet of Barclays Air cabs, which can provide cleaner and healthier air for both passengers and drivers alike. We’ve also made ten of the taxis free for two days in order to help tech innovators like Matthew to take Airlabs to the next level. We want to help many more high-growth entrepreneurs who create growth and jobs for the UK economy.”

The patented technology is being trialed in cabs because pollution levels inside a vehicle can be up to two and a half times higher than outside[5]; measurements of London traffic show nitrogen dioxide concentrations up to 20 times above the exposure threshold, and particulate matter concentrations four times above the exposure threshold – both of which can cause short and long-term health problems.

Recent stats unveiled London as one of the UK’s most congested cities[6], which means the 20,000 plus black cab drivers in London spend every day at work breathing in potentially harmful levels of pollution as well as their passengers.

But it’s not just London that could benefit from a fleet of Barclays Air cabs, as Airlabs reveals that towns and cities across the UK are suffering from unsafe levels of nitrogen dioxide[7], with the highest levels recorded in:

Barclays Air cabs are the first in a line of initiatives to showcase the positive impact of small businesses that are using technology to solve societal and environmental issues. Over the next five years, entrepreneurs working with Barclays will aim to add 16,000 jobs to the UK.[8]

Barclays is committed to backing the UK through supporting SMEs and entrepreneurs, who represent the future of UK jobs and growth. Barclays helps start a new business every 4 minutes, and nearly one million small and medium-sized businesses have been provided with guidance, financial support and more, including 100 Brexit workshops across the UK. The bank also recently launched a £14bn lending fund, to help UK businesses navigate the next three years.

[7] British Department for Environment Food & Rural Affairs. The WHO Guideline safety limit for annual NO2 exposure is 40 µg/m3