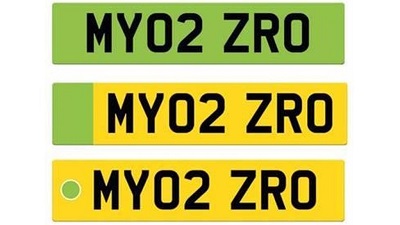 Following yesterday’s announcement that the government is to consult on whether zero-emission vehicles should have a recognisable, possibly green, number plate with the aim of making it possible for local authorities to offer incentives such as driving in bus lanes and cheaper parking.

The government are looking for the views of the industry and public on how to implement the scheme. “As the UK moves at pace towards net zero emissions, the initiative aims to raise awareness of the increasing number of zero tailpipe emission vehicles on UK roads,” said the Department for Transport (DfT)

“Through the introduction of green number plates, local authorities would have a useful visual identifier should they wish to introduce incentives to promote the use of zero-emission vehicles, such as allowing these drivers to use bus lanes and to pay less for parking.”

However, Friends of the Earth responded that without better financial incentives and more charging points, little will change, and the CPT UK, the trade body for the bus and coach industry, said it would be a mistake to allow electric cars to use bus lanes.

“If local authorities allow some cars to use bus infrastructure, which is already severely strained and in need of significant investment, we will simply increase congestion for bus passengers and drive people off the bus and back into cars the vast majority of which are not electric,” said chief executive Graham Vidler.

Ian Johnston, CEO of Engenie says: “If we’re serious about transitioning to a low-carbon transport system, then incentives such as reduced parking fees for EV drivers, or allowing them to drive in bus lanes, is a no-brainier. These developments will help to boost driver confidence, alongside the rapidly expanding public charging infrastructure network that is now in place across the UK.”

Phil Lloyd. Chief Marketing Officer at www.carwow.co.uk, commented: “These new plans, if implemented in a way that benefits and incentivises drivers of electric vehicles, can only be positive when it comes to achieving the government’s 2050 target of net zero emissions.

“Not only will distinctive green number plates easily allow local authorities to spot people misusing parking spaces exclusively designed for electric cars, there has also been talk of easily identifiable green plates making it easier to either introduce EV specific driving lanes, or allow the cars to drive in bus lanes.

“That being said, to say that these motivations alone will improve the UK sales of new electric cars is a little bit misleading. The general public are already interested in migrating over to electric cars, as we witness on a monthly basis here at carwow. There is also the argument that a different coloured number plate will change very little regarding perceptions of electric vehicles, and what will truly encourage people to invest in electric technology is more education surrounding the benefits, as well as financial benefits of being an early adopter.

“Although there are now more EV charging points across the UK than petrol stations, the infrastructure we have in the UK is still in dire need of improvement. Motorists need to know charging points are accessible wherever they happen to be driving in the UK and further afield, and that they can charge their cars in the fastest possible time in order to appeal to the wider population with busy lifestyles.”

Go Ultra Low Ambassador Ben Fogle said: “As someone going through the process of getting an electric car at the moment, the potential to benefit from extra incentives only adds to the appeal. Drivers of electric vehicles could enjoy even smoother journeys, as it becomes easier for local authorities to incentivise EV ownership, through measures such as allowing them in bus lanes and access to free parking. These come on top of existing benefits such as helping to improve local air quality; running costs from as little as 2p per mile; reduced service maintenance and repair costs; and exemptions from congestion and clean air zone charges. As the list of reasons to choose an EV becomes even longer, there really is no better time to consider making your next car electric.”

Alfonso Martinez, Managing Director at LeasePlan UK: “While LeasePlan welcomes any initiative that aims to encourage drivers to opt for electric vehicles, we believe that more needs to be done to tackle a number of significant barriers to widespread EV adoption such as a shortage of supporting infrastructure and misconceptions around cost. Our 2019 Mobility Monitor Report showed that public understanding of the benefits of electric driving is growing. However, 61% of respondents felt the purchase price would be too high and 51% felt there were insufficient charging possibilities.

“It’s crucial that drivers look at the whole life costs when choosing a vehicle. It’s easy to focus on the headline sticker price, but there are many other costs involved – from taxes and insurance to fuel and vehicle depreciation. Depending on how you intend to use the vehicle, choosing to purchase or lease an EV can end up cheaper than a petrol- or diesel-fuelled model.”