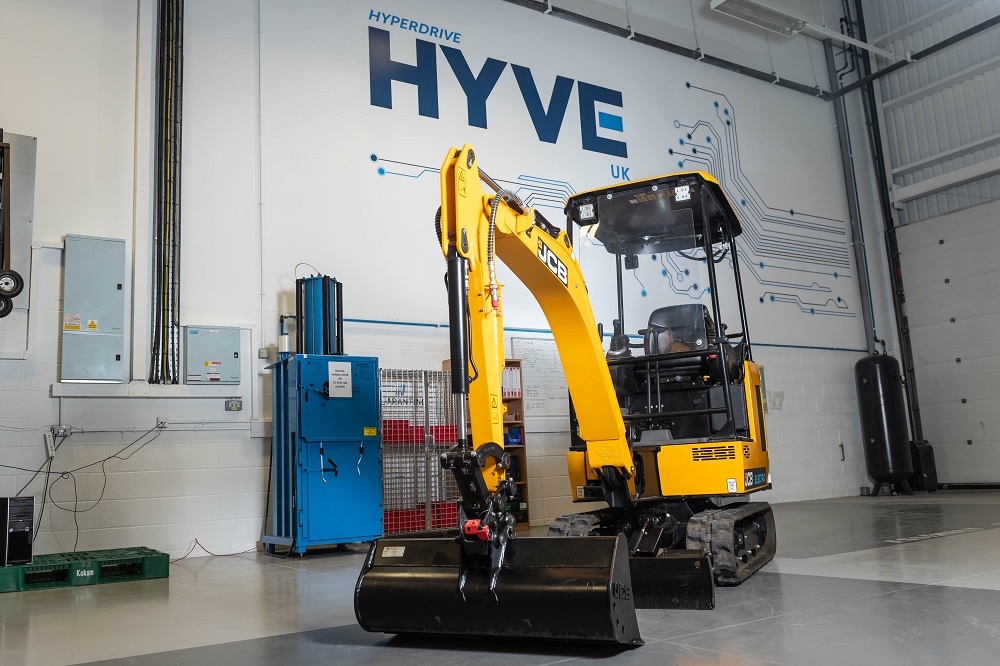 Hyperdrive Innovation, based in Sunderland, produce high powered batteries for electric vehicles such as for JCB’s first ever electric digger.

The site is home to Hyperdrive Innovation, the UK’s foremost designer and manufacturer of lithium-ion battery technology. Sunderland-based Hyperdrive – which makes battery packs for electric vehicles and energy storage systems – has invested £7m into its manufacturing capabilities since moving to the site in 2014.

The new site will allow the TechTrack100 company to produce up to 30,000 battery packs annually and cater to the company’s growing demand from international customers. The move accelerates Hyperdrive’s new product development and technology pipelines, maximising competitiveness on the global stage.

Chris Pennison, CEO of Hyperdrive, says: “We’re working with some of the most forward-thinking and innovative organisations in the world as their trusted electrification and energy storage partner. HYVE enables us to deliver a high-quality product, providing our customers with the right energy at the right time.”

High profile customers set to benefit from HYVE include the world’s largest online grocery retailer and JCB, with whom Hyperdrive has just signed a supply agreement to power its first electric excavator. The industry leading machine is now in production at JCB’s Staffordshire site.

Bob Womersley, Director, Advanced Engineering at JCB, says: “JCB is leading the way in clean technology and reducing harmful emissions, especially in urban, air quality sensitive environments and enclosed spaces.  We have introduced   E-TEC technology to give zero emissions at point of use with no compromise on machine performance.  Using batteries from Hyperdrive Innovation, the new 19C-1E is the industry’s first fully electric mini excavator.”

The groundbreaking partnership between these two world-leading British businesses was recently referenced in a government announcement on the UK’s ambition to lead the world in zero emissions vehicles as part of its industrial strategy.

The UK is a leader in the global low carbon technologies sector. Hyperdrive is a prime example of an innovative British company which has helped enable the UK to grow its economy by 67% from 1990 to 2015 whilst also achieving a 42% reduction in emissions – a feat made even more impressive when comparing it to the G7’s growth of 61% and emissions reduction of just 3% during the same period.

Andrew Stephenson MP, UK Government Business Minister, commented: “We are committed, through our Industrial Strategy and Automotive Sector Deal, to establishing the UK as a world leader in battery technology and the HYVE facility will help play a crucial role in us delivering on this ambition.

“Its customers include some of the world’s most recognisable brands, from major supermarkets to manufacturers of off-road vehicles, all of whom will benefit from having high-quality batteries, made right here in the UK.”

Support from the Advanced Propulsion Centre (APC) played an integral role in the early stages of Hyperdrive’s seven-year history. The High Energy Density Battery Project (HEDB), in partnership with Nissan and funded by a £9.7m APC grant, enabled Hyperdrive’s latest battery technology to be brought to market.

Hyperdrive has also invested £50,000 in a software system to help with manufacturing planning decisions, and enable efficient stock control. Last year, the company was the only North East firm to be named in the TechTrack100, which ranks the UK’s fastest growing independent technology firms and in June 2019, won the Automotive Award at the prestigious Made in the UK national finals