A quarter of UK drivers have defective brake fluid 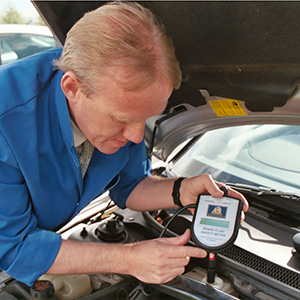 Check brake fluid boiling point at your next service

The brakes on more than a quarter of cars in the UK could fail without warning, according to a new report.

Research testing the quality of brake fluid – the liquid that allows the modern braking system to work – at independent service garages across the UK has found that 26.5% of UK motorists had defective brake fluid, with nearly one in 10 unintentionally risking their lives every time they drove.

Brake fluid absorbs moisture from the atmosphere, which reduces its effectiveness by lowering the boiling point. Once the boiling point dips beneath 180 degrees Celsius, brake fluid becomes increasingly ineffective, with the potential to cause sudden and inexplicable brake failure.

The study also revealed a worrying lack of understanding among motorists about how brake fluid functions, with three quarters of workshop customers either admitting they don’t know or giving an inadequate account when asked. More than a third (34%) had not changed their brake fluid for over two years.

The research suggests that the ‘phantom’ nature of brake fluid failure could account for thousands of accidents every year. But, while a visual fluid level check will be carried out during a vehicle’s MOT, quality testing is not part of the only vehicle check motorists are legally obliged to carry out.

Mike Bewsey, of Cosan Lubricants, marketeer of Mobil Car Care products in Europe, said: “Many drivers mistakenly believe that, if their car has passed its MOT, all of the lubricants and chemicals within it are up to scratch. But testing the boiling point temperature is the only way to check the quality of brake fluid. As that is not part of the MOT, the onus is clearly on motorists to make sure that their car is safe.”

You can avoid the impact of brake failure by asking your technician to check your brake fluid boiling point at your next service.