The UK new car market declined again in October, with registrations falling by -1.6% year on year, according to the latest figures published today by the Society of Motor Manufacturers and Traders (SMMT). The industry recorded 140,945 new car registrations last month, making it the weakest October since 2011 and -10.1% lower than the average recorded over the last decade.1 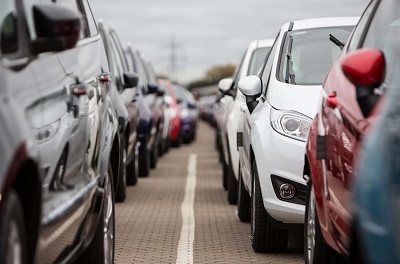 The arrival of new models and ongoing financial incentives helped initially to sustain UK demand in the month, but the introduction of a ‘firebreak’ lockdown in Wales on 23 October contributed to the nation recording -25.5% fewer registrations by the end of the month, which accounted for more than half of the overall UK decline.

Subdued activity from businesses drove much of the month’s drop, with around 2,500 fewer vehicles joining larger fleets than in October last year, while private registrations saw a modest increase of 0.4%. However, this performance was flattered by a weak October 2019, when ongoing supply issues arising from regulatory challenges, as well as political and economic uncertainty ahead of the anticipated Halloween Brexit withdrawal date, saw overall registrations by private buyers recede by -13.1% in the month.

As of mid-October, the industry had been expecting to register about 1.66 million new cars in 2020. However, with the announcement of a second lockdown for England, which will include the closure of vehicle showrooms, the market forecast has been downgraded by a further 100,000 units to 1.56 million. This equates to a total year-on-year decline of around 750,000 registrations 2 and a £22.5 billion loss in turnover 3, with 2020 now likely to be the weakest year since 1982.4

While the continuation of click & collect and delivery services is welcome, and should help prevent a return to the sales wipe-out experienced in the spring, it cannot offset the loss of custom from the closure of showrooms themselves, given the unique nature of the car purchase process.

Mike Hawes, SMMT Chief Executive, said, “When showrooms shut, demand drops, so there is a real danger that with England today entering a second lockdown, both dealers and manufacturers could face temporary closure. What is not in doubt, however, is that the entire industry now faces an even tougher end to the year as businesses desperately try to manage resources, stock, production and cashflow in the penultimate month before the inevitable upheaval of Brexit. Keeping showrooms open – some of the most Covid-secure retail environments around – would help cushion the blow but, more than ever, we need a tariff-free deal with the EU to provide some much-needed respite for an industry that is resilient but massively challenged.”

“Despite this, the continued rise of electric vehicles on the UKs roads is a glimmer of hope. We are seeing an increased interest in EVs among our customers as they begin to realise that alternative-fuelled vehicles can work for them. Barriers to adoption including vehicle choice and range anxiety seem to be disappearing as drivers become more educated on the benefits of making the switch. The figures also suggest that the measures to reduce tax to 0% on zero-emission company cars for 20-21 have worked to incentivise drivers to make the transition now.

“However, it’s important to understand that the total number of EVs on the UK’s roads still only accounts for 5.5% of vehicles. Clearly, we’ve got a lot of ground to make up. The government’s plan to bring forward the ban on the sale of new petrol and diesel vehicles from 2040 to 2030 will no doubt accelerate adoption levels, although additional fiscal support for OEMs and end users is needed to deliver the Road to Zero strategy.”

Jon Lawes, Managing Director of Hitachi Capital Vehicle Solutions, said: “These nine-year low figures sadly come as no surprise considering the challenges created by economic lockdowns and Brexit, which has depressed both the market and consumer demand.  The one positive is that the demand for electric and hybrid vehicles continues to grow, up 143.9% compared to this time last year, despite the challenging circumstances. This long-term growth demonstrates to the industry and Government that consumers and business see real alternatives to diesel and petrol vehicles.

“To keep this momentum in line with the growing number of electric and hybrid models coming to market, we are calling on the Government to collaborate more effectively with our industry to develop the charging infrastructure which will adequately support, and accelerate the transition to EV’s and crucially, provide both business and consumers with the confidence that EV’s are operationally viable replacements.” 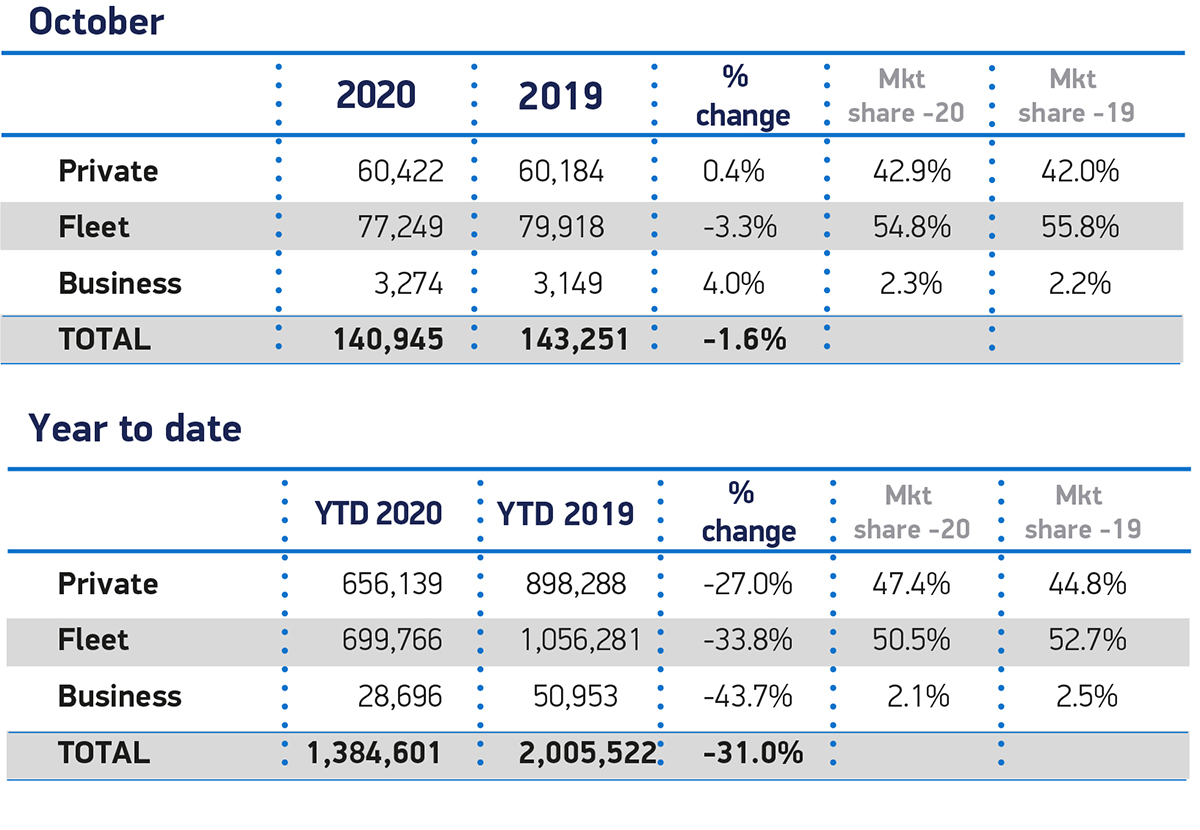 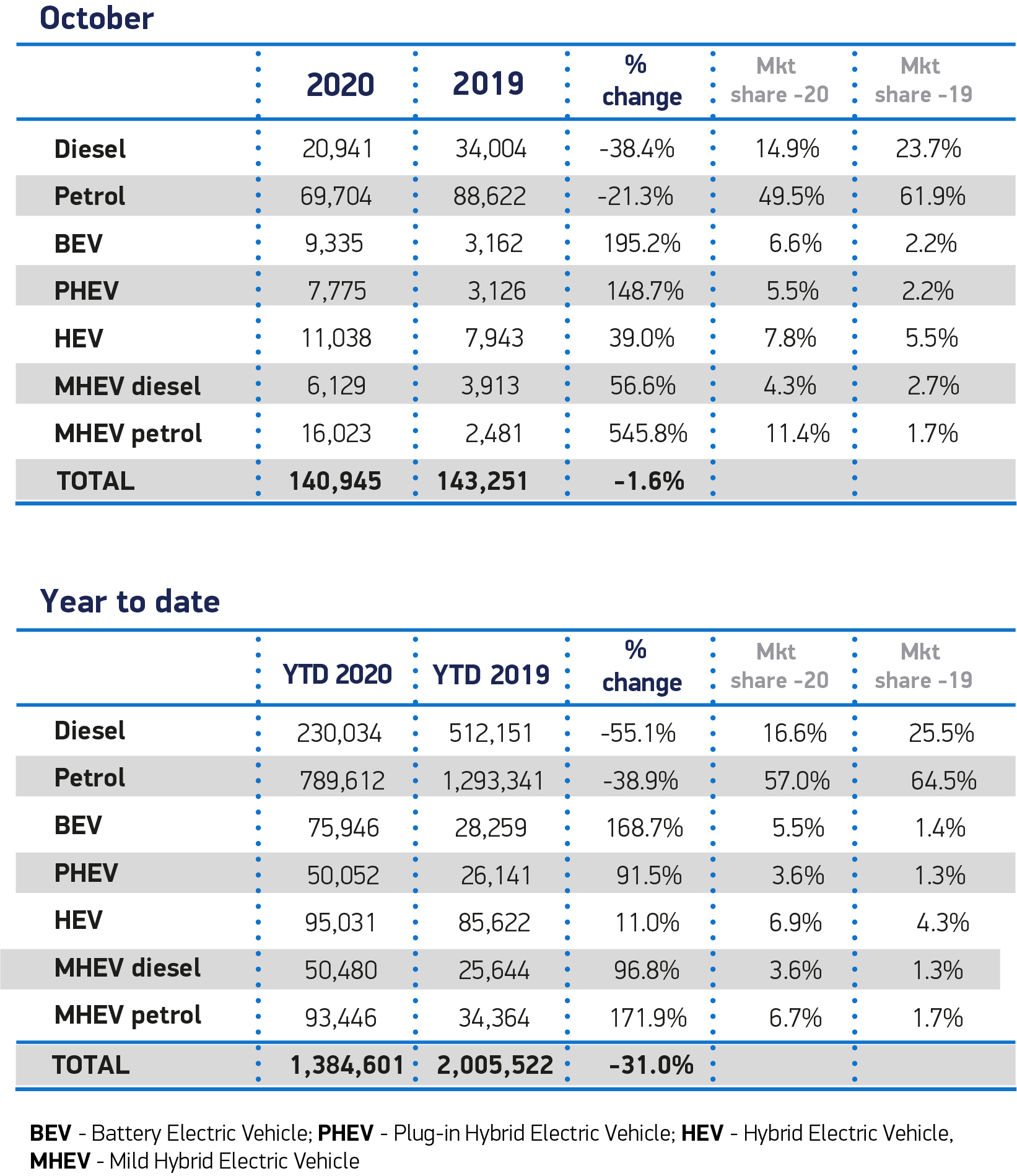 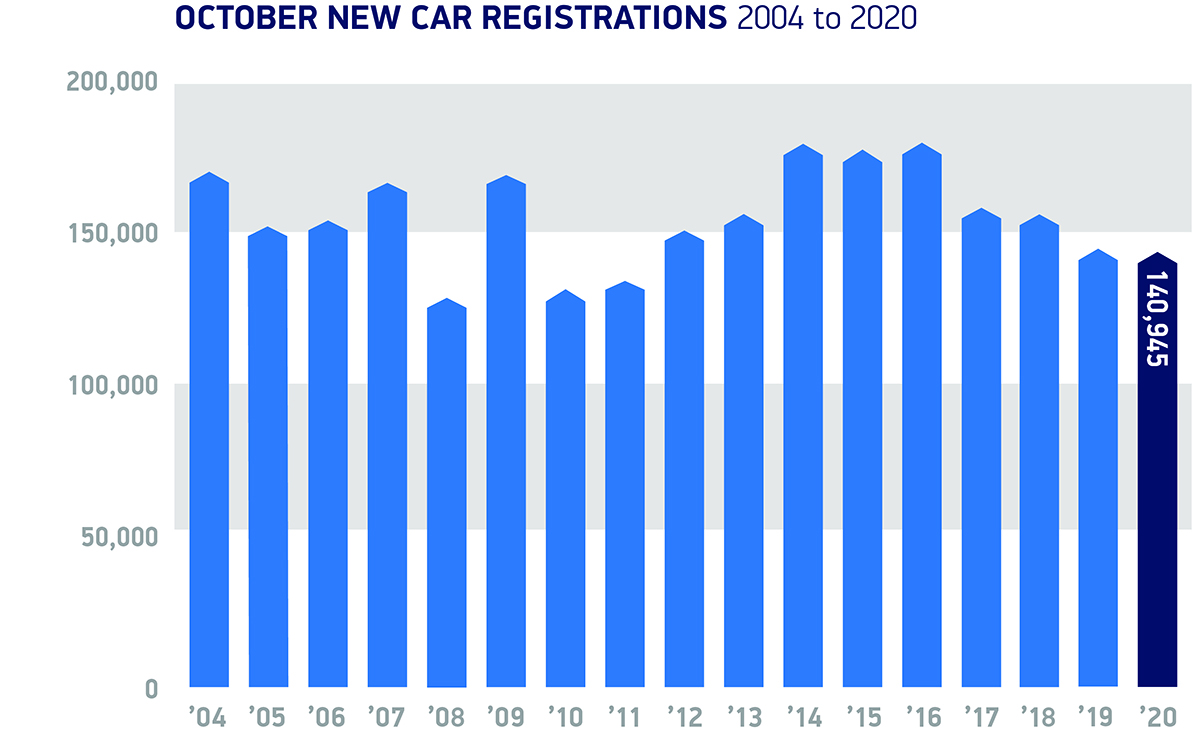