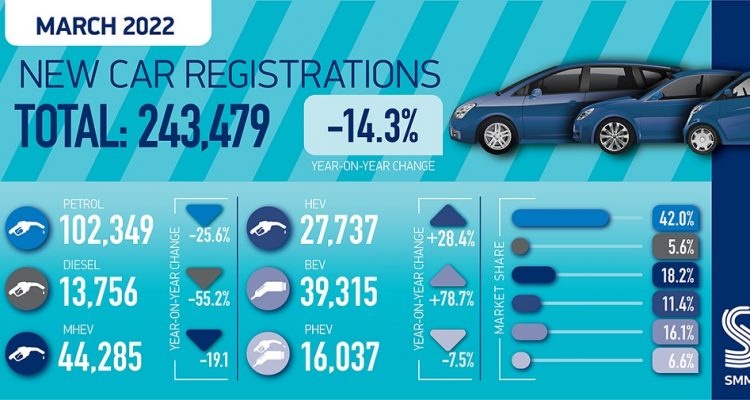 UK new car registrations fell by -14.3% to 243,479 units in March, according to the latest figures from the Society of Motor Manufacturers and Traders (SMMT). Despite manufacturers reporting robust order books during the first quarter, ongoing supply chain shortages – especially of semiconductors – continued to squeeze supply during what is normally the industry’s busiest month as buyers demand the latest numberplate. 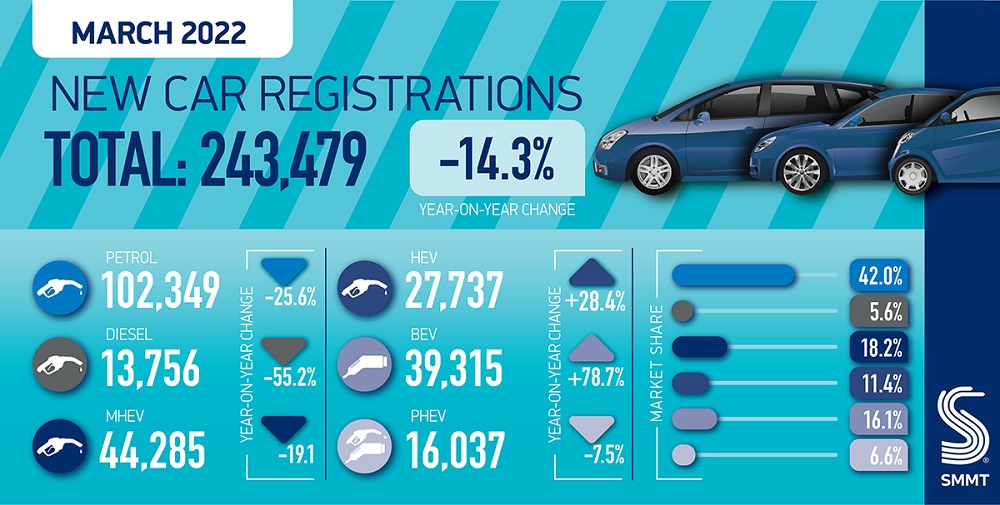 This is, therefore, the weakest March since 1998, which was prior to the introduction of the two-plate system.1 Given around 20% of total annual registrations are usually recorded in March, the result is massively disappointing for the sector and underscores the long-term impact the pandemic is wreaking on the industry. In spite of the rollback of pandemic restrictions, which limited the industry to ’click and collect‘ in the first part of 2021, overall Q1 registrations for 2022 were down -1.9%.

Battery electric vehicles (BEVs) continued to enjoy tremendous growth, with 39,315 new zero emission cars leaving dealerships – an increase of 78.7% on last year – and taking a 16.1% market share. This is the highest volume of BEV registrations ever recorded in a single month, and means that more were registered in March 2022 than during the entirety of 2019.2 Plug-in hybrid (PHEVs) registrations declined by -7.5% to 16,037 units, but hybrids (HEVs) grew 28.4% to 27,737 units. As a result, electrified vehicles comprised more than a third (34.1%) of all new car registrations.

With the industry reporting strong order books, it is the constraints on supply that are preventing the sector from moving into full recovery. The shortage of semiconductors, itself an effect of the pandemic, is affecting the sector globally but longer-term uncertainty remains, with the invasion of Ukraine raising risk to supply chains. More broadly, however, economic headwinds such as rising energy costs, fuel costs, inflation and a squeeze on household incomes could impact new vehicle demand. With grants for BEVs ongoing until at least next March, however, interest rates still low and electric cars benefiting from lower running costs, there are significant benefits for drivers who can order new vehicles now.

Mike Hawes, SMMT Chief Executive, said, “March is typically the biggest month of the year for the new car market, so this performance is deeply disappointing and lays bare the challenges ahead. While demand remains robust, this decline illustrates the severity of the global semiconductor shortage, as manufacturers strive to deliver the latest, lowest emission vehicles to eagerly awaiting customers. Placing orders now will be beneficial for those looking to take advantage of incentives and lower running costs for electric vehicles, especially as the Ukraine crisis could affect supply still further. With increasing household and business costs, government must do all it can to support consumers so that the growth of electric vehicles can be sustained and the UK’s ambitious net zero timetable delivered.”

Jon Lawes, Managing Director, Novuna Vehicle Solutions: “If the data tells us one thing, it’s that electrification of the UK’s motor industry is accelerating despite ongoing supply challenges. In the face of sky-high prices at the petrol pumps, motorists are taking advantage of a greater choice of electric vehicle (EV) models on the market, and attractive salary sacrifice schemes offered by leasing providers, to make the transition to an EV sooner rather than later.

“With charger provision not keeping pace with the wave of EVs hitting UK roads and a lack of consistent charge pricing across a wide array of operators, this only reinforces the need for the Government’s plans to increase charging points tenfold by 2030 to gather momentum now.

“Despite the series of commendable initiatives to support the transition published last month, the immediate challenge is ensuring these pledges translate into a coordinated rollout of schemes between the Office for Zero Emission Vehicles and local authorities.

“There is still an onus on the Government to do more to encourage EV ownership. While not enough of a setback to put the brakes on EV adoption, the decision not to cut VAT on public charge points was a blow to the hundreds and thousands of motorists who will be forced to rely on the public network.”

Karen Johnson, Head of Retail & Wholesale at Barclays Corporate Banking, said: “March 2022 has not been the success that UK car dealers had hoped for. Lockdown is over, and many dealers expected the number plate change to bring in some of the new registrations that had eluded the industry during the pandemic. However this has not materialised. There will be additional concern in the industry given the decisions to buy the cars that were registered last month were made long before the recent crisis in Ukraine, and the impact of these events on both consumer confidence and the supply of new vehicles could prove an additional issue for the motor industry in the months to come.”

Jamie Hamilton, automotive director and head of electric vehicles at Deloitte, said: “New car sales in March fell by -14.3% compared with March 2021; a time when sales were also feeling the negative effect of showroom closures as a result of COVID-19 restrictions. This will be disappointing for a month that is traditionally the biggest for new vehicle purchases with the release of new registration plates. We expect more significant sales to be felt in September when the next plate change is due. Many dealers have put in their orders now to build a pipeline of stock in preparation.

“It’s clear that the automotive industry is still recovering from the pandemic, with momentum regularly stalled by supply issues. The sector now faces new economic challenges; most notably with high levels of inflation and a squeeze on the cost of living. Combined, these factors have contributed to a sharp decline in consumer and economic confidence, dampening any underlying pent-up demand for new cars.

“A fall in consumer demand and higher oil and raw material prices are also piling additional pressure on manufacturers at a time when the sector continues to contend with supply chain disruption. In particular, the ongoing semi-conductor shortage remains a major issue for the automotive sector.

“The government’s long awaited Electric Vehicle Infrastructure Strategy announced in March adds important momentum to the journey towards an all-electric future and race to net zero. The commitment of reaching 300,000 public chargepoints by 2030 will help alleviate anxiety amongst the one in three UK households who don’t have off-street parking, making access to EVs more equitable in the future.

“The strategy also makes a welcome commitment to working with commercial fleets. Even with a fall of -34.4% of fleet sales in March 2022, they still account for two-fifths of all new car sales in the UK. Supporting their electrification will be key to achieving 2030 targets. In order to avoid any shocks along the way, now is the time for private companies to begin considering their EV transition plans.

“With car manufacturers and others within the private sector also making significant commitments to electric mobility, this strategy begins to remove some of the constraints to continued future growth.”

Meryem Brassington, electrification propositions lead at Lex Autolease said: “The latest figures from the SMMT show that the growth in EV take-up continues apace – now accounting for 16% of all new motors bought in the UK. The continued adoption is essential to provide a good supply of used EVs in the future to ensure the transition to electric is accessible for everyone.

“The government’s plans for a tenfold increase in electric car charge points by the end of the decade will go a long way to removing charging infrastructure as a perceived and real barrier to adoption of EVs. Delivery on this is critical especially for those drivers and businesses in rural areas where access to charging remains a major barrier to electric vehicle uptake.”

Felicity Latcham, Associate Partner at OC&C, said: “These figures round off an encouraging start to the year for the decarbonisation of the UK’s motor industry. With over twice as many newly registered battery powered vehicles compared to this time last year, it is clear that demand for EVs is continuing to surge, reflecting sentiment in OC&C’s annual Speedometer report which revealed that in 2021 57% of UK drivers were considering going fully electric for their next car purchase. The healthy figures also point to manufacturers prioritising limited chip supplies on higher margin and higher priority models – many of which are EVs.

“Increased uptake places an even greater emphasis on the UK’s EV charging infrastructure. Despite the Government pledging a further £1.6bn and the installation of 300,000 charge points by 2030, questions remain as to whether this number is sufficient and how the target will be reached.

“Zap Map data shows 30,000 charge points currently installed in the UK, which have increased annually by 35% across five years. While that makes for positive reading, industry estimates suggest at least 400,000, as opposed to 300,000 points, are required by 2030, meaning approximately 40,000 points a year will need to be installed if the UK is to have a future-proof EV-ready fleet by the next decade.” 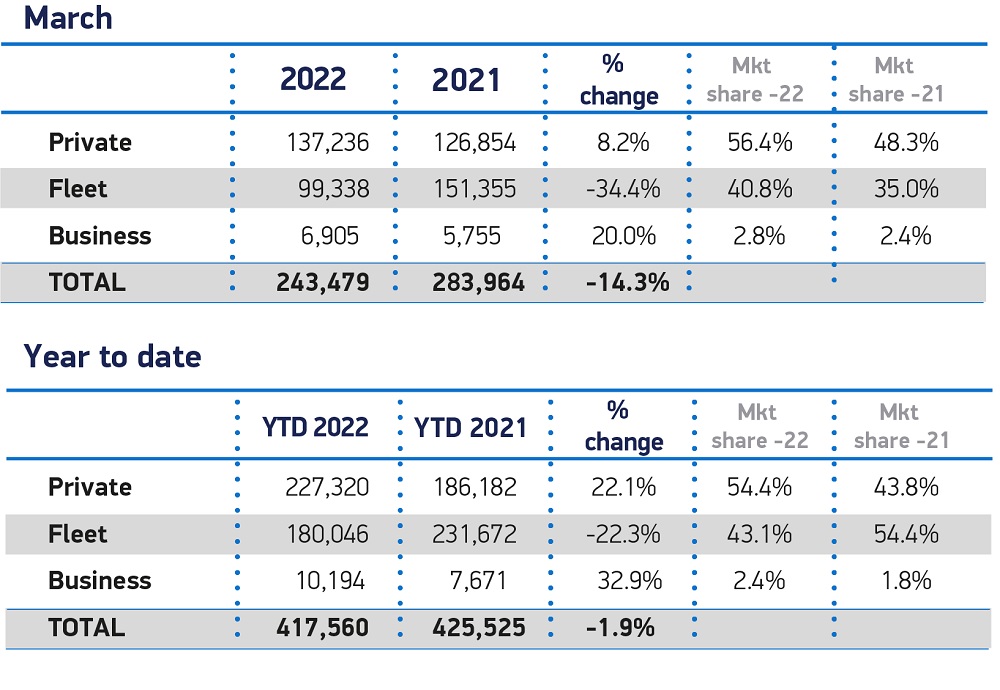 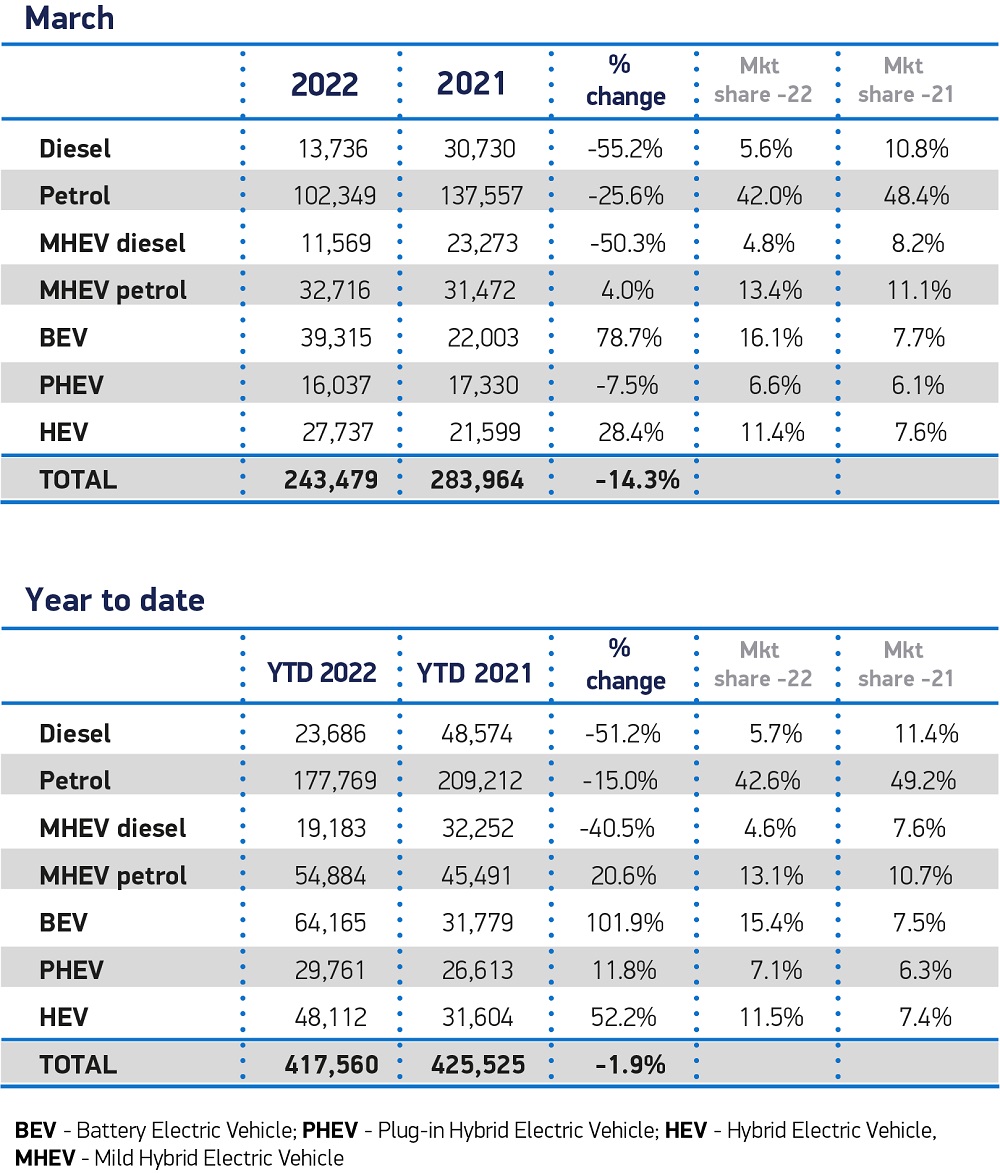 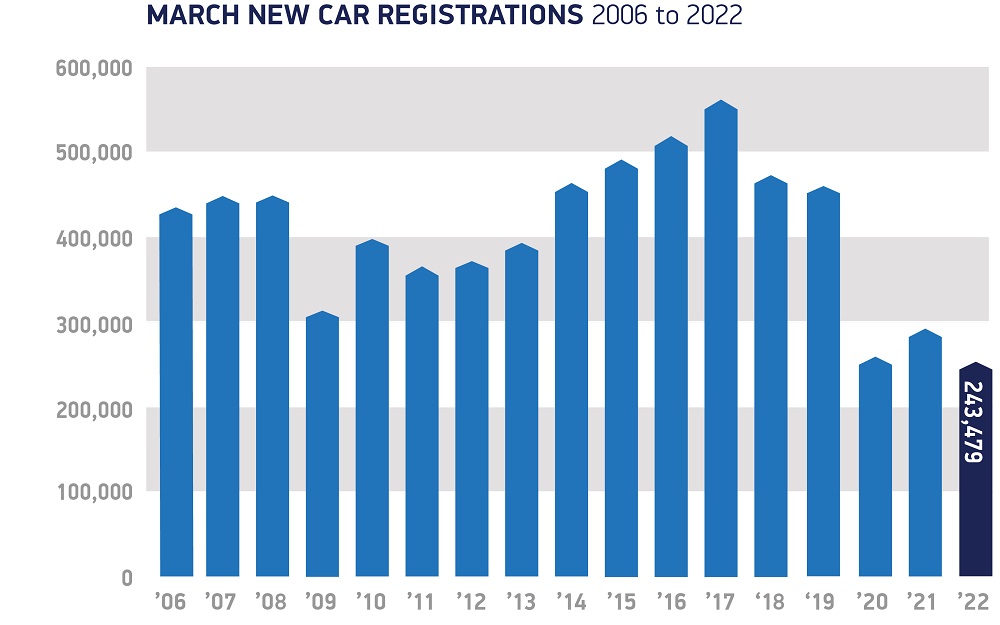