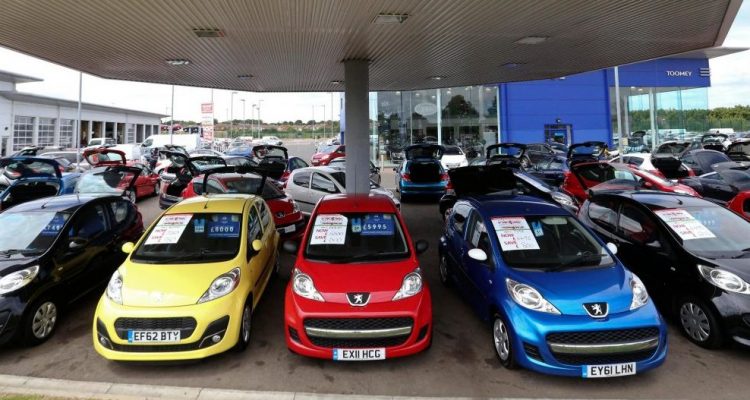 New UK car registrations fell -20.6% to 124,394 units in the second weakest May since 1992, after the 2020 pandemic-hit market, as supply shortages continued to hamper new purchases and the fulfilment of existing orders, according to the latest figures from the Society of Motor Manufacturers and Traders (SMMT). The decline, compared with the first full month of reopened showrooms in May last year, demonstrates the impact of continued global supply chain disruptions, with the market -32.3% below the 2019 pre-pandemic level despite strong order books. 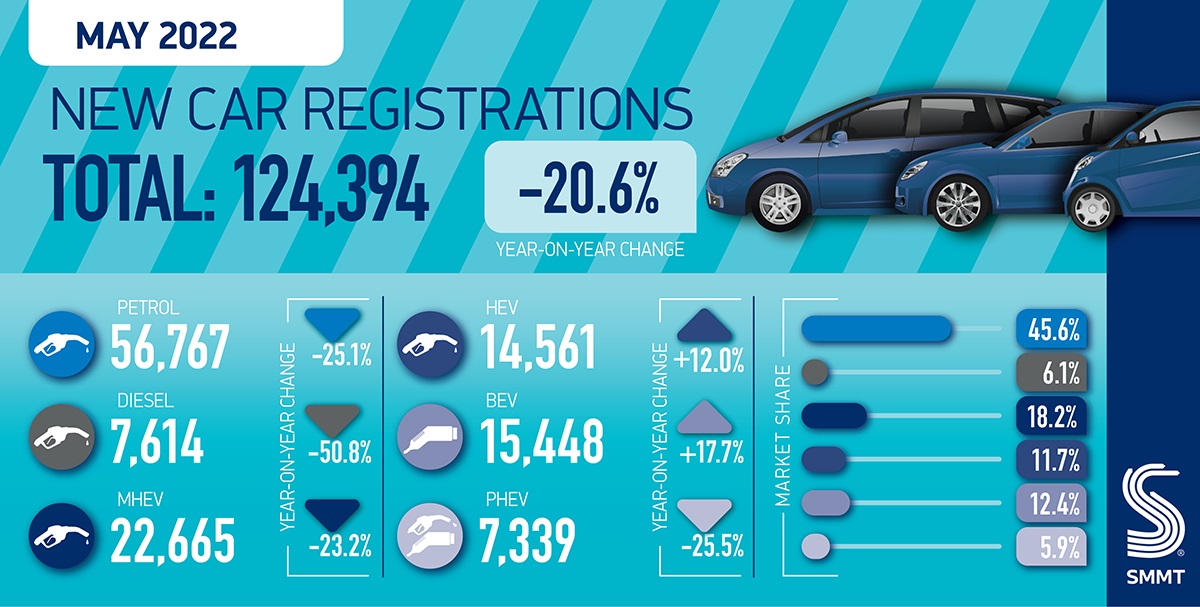 While private consumer purchases fell -10.3%, their market share increased year-on-year by 6.1 percentage points to 53.2%, in part due to manufacturers striving to fulfil deliveries – particularly of electric vehicles – to private buyers, with the commensurate effect on the business and large fleet sectors, which now comprise 46.8% of the market.

Despite the myriad challenges affecting the industry and a high level of market distortion due to restricted supply of all vehicle types and technologies, manufacturers have worked hard to sustain progress towards the decarbonisation of road transport and the delivery of UK’s ambitious net zero targets. May saw registrations of battery electric vehicles (BEVs) rise by 17.7%, representing one in eight new cars joining the road last month. Plug-in hybrids declined -25.5%, while hybrids were up 12.0%, meaning deliveries of electrified vehicles accounted for three in 10 new cars.

Superminis continued to be the most sought-after segment by British motorists, making up 32.7% of registrations in the month, despite their registrations falling -16.4% to 40,667 units, followed by dual purpose, which accounted for 28.9% of the market even after a -14.1% fall in volumes. The small volume luxury car segment was the only area of growth, up 16.8%, to 369 units.

The supply chain challenge has contributed to an overall market decline in the year to date of -8.7%, equivalent to 62,724 fewer units. This is -40.6% below the five-year average recorded from January to May, as the new car market continues to struggle to emerge from the impact of the pandemic.

Mike Hawes, SMMT Chief Executive, said, “In yet another challenging month for the new car market, the industry continues to battle ongoing global parts shortages, with growing battery electric vehicle uptake one of the few bright spots. To continue this momentum and drive a robust mass market for these vehicles, we need to ensure every buyer has the confidence to go electric. This requires an acceleration in the rollout of accessible charging infrastructure to match the increasing number of plug-in vehicles, as well as incentives for the purchase of new, cleaner and greener cars.

“Delivering on Net Zero means renewing the vehicles on our roads at pace but, with rising inflation and a squeeze on household incomes, this will be increasingly difficult unless businesses and private buyers have the confidence and encouragement to do so.”

Jamie Hamilton, automotive director and head of electric vehicles at Deloitte, said: “Despite an overall decline in new car sales (-21%), battery electric vehicles managed to achieve 18% growth in May and, as a result, almost one in eight new cars sold were fully electric.

“With fuel prices at the pump at record highs, many consumers are thinking more about the potential benefits of moving to electric; some for the first time. Were it not for continued supply constraints, the growth of EVs could have been even sharper this month.

“Despite the ongoing success of EVs in the new car market, recent figures from the SMMT showed that fewer than one in fifty vehicles on the UK’s roads are electric. This highlights the challenge ahead in fully decarbonising road transport in the UK.

“Fleets have an important role to play in speeding up the transition to electric. However, fleet managers need to be given more support in order to realise the benefits and opportunities associated with a holistic transition to electric, rather than just a standard ‘vehicle by vehicle’ replacement.”

Jon Lawes, Managing Director, Novuna Vehicle Solutions: “Electric vehicles have been flying off production lines this year, so much so that new EV registrations still seem highly likely to reach parity with petrol and diesel vehicles in a matter of months. It’s a psychologically important tipping point, and one we are accelerating towards so quickly because prolonged supply chain challenges are strangling production across the industry, causing manufacturers to prioritise the supply of EVs in the face of healthy demand.

“Supply is constrained on both sides of the market, but we’ve yet to see recently emerging fears around battery supply do much to curtail the production of EVs, and certainly not to the same extent as across the rest of the industry. We’re very much in a sellers’ market, which points to further price rises, and longer waiting lists which means consumers and commercial fleet operators need to plan well ahead and consider extending existing leasing contracts to cover the delay in new vehicle deliveries.” 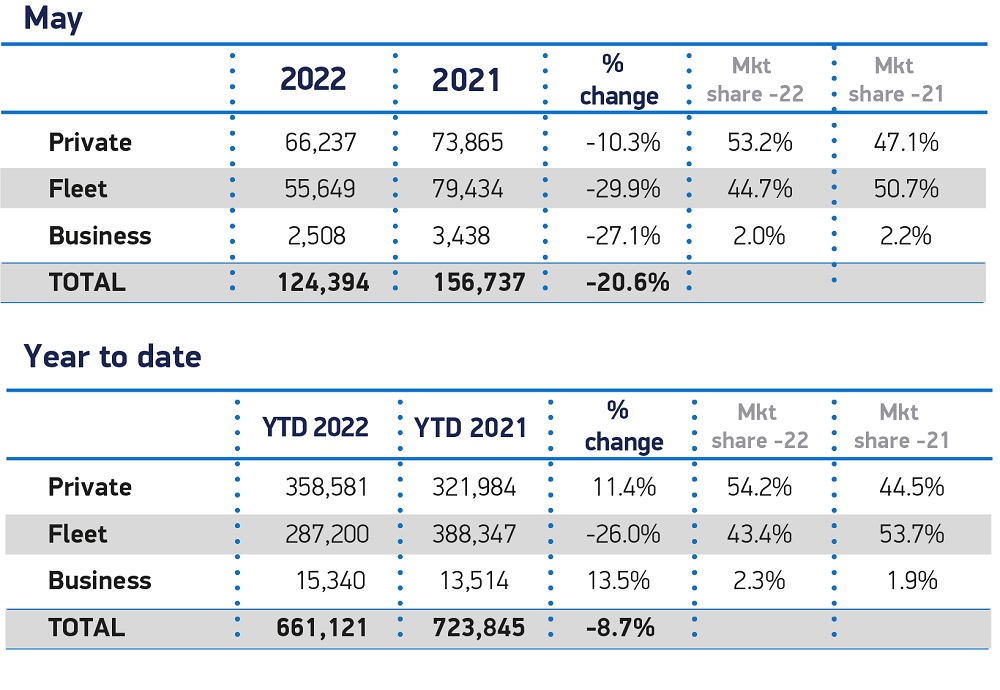 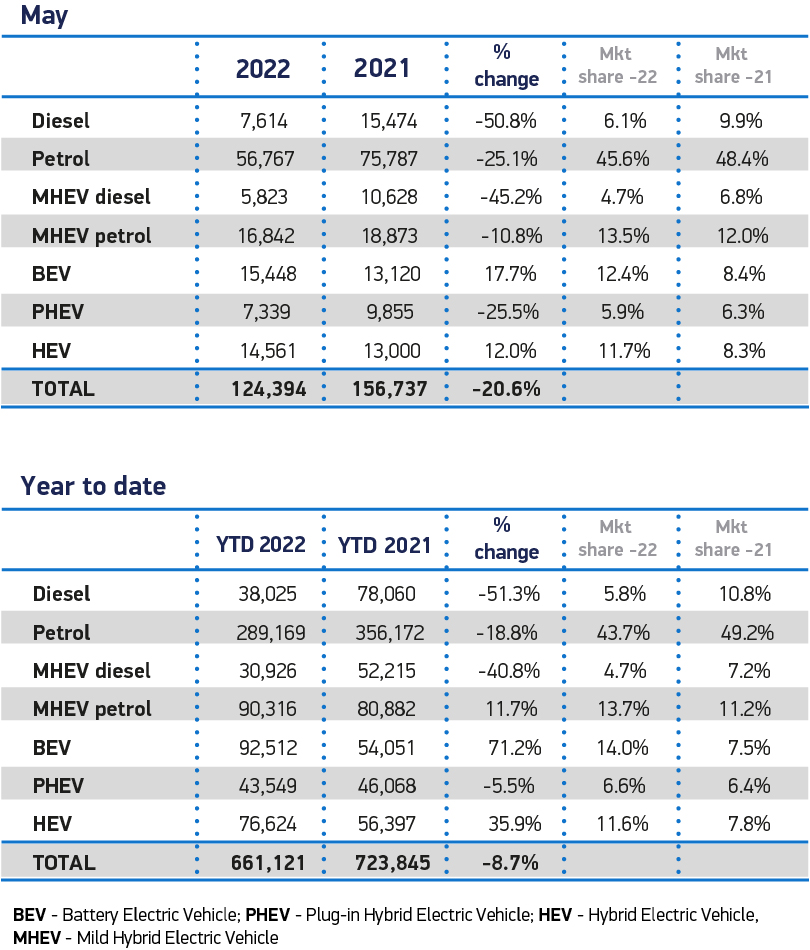 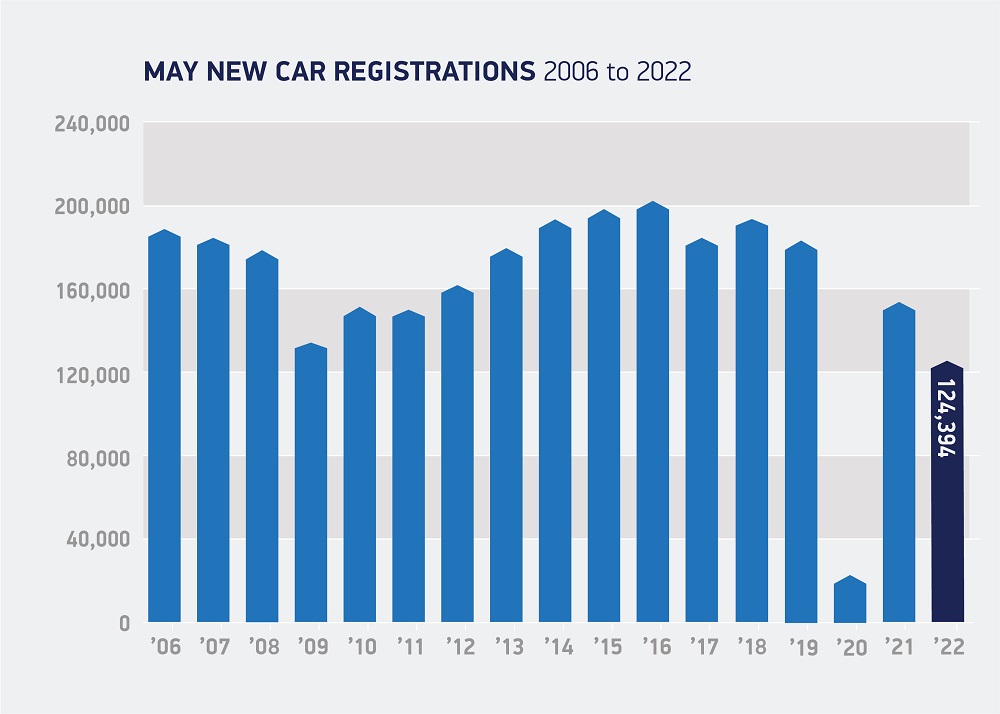