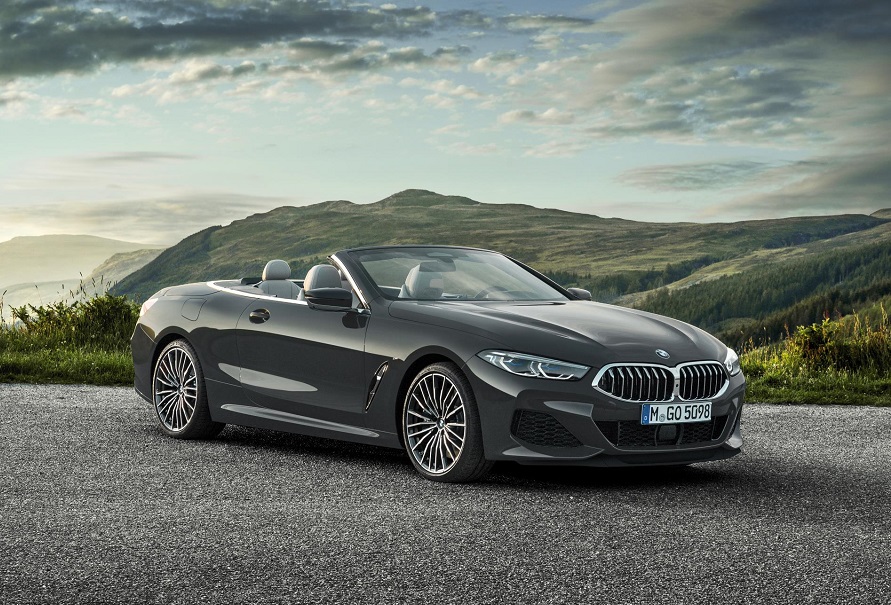 The new BMW 8 Series Convertible combines open-top, four-seater luxury with sportscar performance and handling, a spacious interior and a superb soundtrack to match.

Two engines will be offered at launch: a V8 petrol engine in the 530hp BMW M850i xDrive version and a 320hp six-cylinder diesel in the BMW 840d xDrive.

Using the new 8 Series platform and distinctive new design language, the new BMW 8 Series Convertible marries elegance with sporting prowess. With an exterior length of 4,843mm, a width of 1,902mm and height of 1,339mm, along with a 2,822mm wheelbase and track widths of 1,619mm (front), its dimensions match those of the BMW 8 Series Coupé almost exactly.

The focus on exceptional body rigidity for the concept underpinning the BMW 8 Series means that only a small number of additional convertible-specific and weight-increasing measures were required.

The BMW 8 Series Convertible cuts an impressive figure with both the roof up or down. Precise character lines trace the path of the airflow between the front and rear wheels while tapered surfaces around the front wheels and doors spread out at the top of the rear wheels. Discreet contouring marks out the surfacing above the rear wheels as the flanks transition into the rear end.

The compartment for the soft-top roof causes the trailing edge of the car’s body to be slightly higher than that of the BMW 8 Series Coupé. With the roof down the rear end appears extremely flat and low to the road. In addition, horizontal lines and light units extending into the flanks accentuate the width of the car. The third brake light embedded in the boot lid adds to the low-slung look.

Other model-specific features include a brace of contour lines on the boot, while the L-shaped rear lights are underscored by the line of the taillight bar that lights up uniformly. Twin exhaust trapezoidal tailpipes round off the lower section of the rear apron.

The BMW 8 Series Convertible is equipped with adaptive LED headlights as standard. BMW Laserlights are available with variable road illumination and Selective Beam, as a cost option. Further scope for individualisation is offered with the Chrome Line Exterior and M Carbon Exterior exterior package.

In addition to the sculpted rear apron and bespoke side skirts, the M Sport base trim includes Air Breathers finished in Pearl-effect Chrome on the inside, exhaust tailpipe embellishers in light chrome and a rear diffuser in Dark Shadow. The fronts of the kidney grille slats come in a neatly coordinated Aluminium matt.

The new BMW M850i xDrive model features many body elements from the M Sport base model, including a front spoiler extension and exclusive design accents in Cerium Grey. The features finished in this colour include the BMW kidney grille surround and slats, the exterior mirror covers, the Air Breather inlays, the tailpipe embellishers, the M logo on the front flanks and the model badge on the rear. Customers can also specify an M Carbon exterior package as an option, which adds air intake bars, exterior mirror covers and a rear apron insert that houses the exhaust tailpipes.

The optional Chrome Line Exterior provides further scope for individualising the outside of the car. Here, the side window graphic and exterior mirror bases come in chrome, while High-gloss Chrome is preferred for the surround and slats of the BMW kidney grille and – on the BMW M850i xDrive Convertible – the exhaust tailpipe embellishers.

The new BMW 8 Series Convertible will be launched with a choice of one non-metallic and seven metallic exterior paint finishes. BMW Individual offers a wider choice of paint finishes including matt paint finishes with a satiny surface and the Frozen Bluestone metallic shade.

The new BMW 8 Series Convertible’s roof is lightweight and provides superb acoustic insulation. Opening and closing automatically at the touch of a button in 15 seconds, the insulated roof can be activated when the car is travelling at speeds of up to 31mph.

When the soft-top roof is closed, it sits taut over the interior, thus retaining its coupé-like silhouette without compromising on design. Finished in Black as standard or in Anthracite Silver effect as a cost option, the soft-top stows away neatly under a cover. In keeping with the rest of the car, the cover is finished in colours that complement and match the instrument panel and interior door/side panel trim and features eye-catching domes at the level of the rear seats.

Both the driver and passengers are surrounded by the sweeping flow of the instrument panels in the back and in the front of the cabin, as well as the door shoulders and soft-top compartment cover. Design-led from the outset, the side window border sits flush with the soft-top compartment surround, underlining the connection between the front and rear of the car. 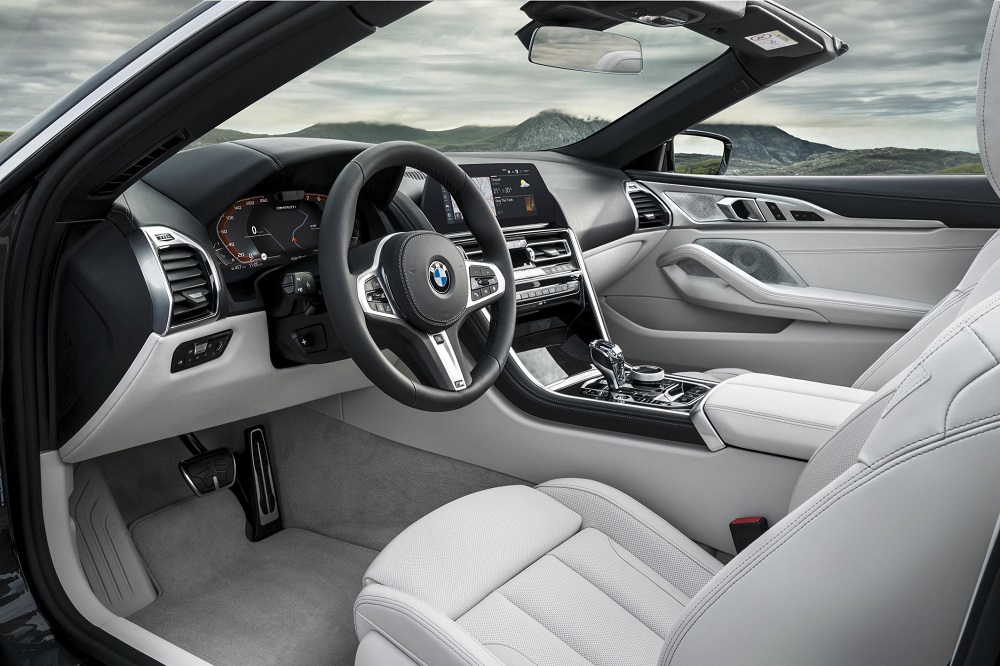 The colour of the BMW 8 Series Convertible’s ambient lighting be changed via the iDrive menu and, in addition, the Dynamic interior light function emits pulsating light signals in specific situations. These signals appear on the inner panelling of an open door when the engine is running and on the instrument panel in response to an incoming phone call.

Electrically adjustable multifunction seats are fitted as standard in both models and are trimmed in Merino leather with a range of colour choices. The standard M leather steering wheel has multifunction buttons and gearshift paddles to control the eight-speed Steptronic Sport transmission and BMW xDrive.

Standard specification for the 8 Series Convertible include the BMW Individual Merino leather trim in an exclusive Black with piping in BMW M GmbH colours. There is also an anthracite BMW Individual headliner, M pedals and floor mats with special M surrounds.

The illuminated door sills and the display in the instrument cluster bear the BMW M Performance model badge and M logo respectively. In conjunction with the M Technic Sport Package, the exclusive interior design of the BMW 840d xDrive Convertible is supplemented by black seat belts with accent stripes in M GmbH colours.

Thanks to the standard telephony with wireless charging, it is possible to charge compatible mobile phones without the need for a cable. The BMW Display Key lets drivers stay in touch with their BMW 8 Series Convertible at all times – besides indicating the fuel level and service -related information, the colour display is also able to show whether the doors and windows of the car are closed or locked.

The rear-seat backrest of the new BMW 8 Series Convertible can be split 50:50 and, thanks to the through-loading facility, the capacity of the luggage compartment can be extended as required. With the soft-top closed, the stowage capacity is 350 litres. In order to ensure the load compartment offers as much space and flexibility as possible, the soft-top compartment can be lifted and the through-loading facility used even when driving with the top down. Automatic boot lid operation is also standard, while the standard Comfort Access feature permits hands-free opening and closing of the boot lid.

Keeping warm with the top down

The new BMW 8 Series Convertible includes a wind defector as standard. This can be set up in the rear-seat area to reduce turbulence when the roof is down. When not required it can be folded to half its size and stowed in the boot. Neck warmers integrated in the front-seat head restraints are also.

Other warming optional extras include ventilated seats and a Heat Comfort Package with a heated steering wheel.

Safety and connectivity as standard

A new convertible-only rollover protection system has been engineered for the car. It consists of two protective aluminium bars fitted within the head restraints and they will be deployed if the car is likely to roll over to protect up to four occupants.

Standard driver assistance systems on the BMW 8 Series Convertible includes the Head-Up Display and Active Guard, which comprises the Collision Warning and Pedestrian Warning system with City Braking function. In addition to Parking Assistant, which includes a rear-view camera and the Reversing Assistant.

Among the items on the options list is Driving Assistant Professional (extra features include the Steering and lane control assistant).

Two engines are used in the BMW 8 Series Convertible and they are accompanied by a model-specific sports exhaust system.

Both engines meet the Euro 6d-TEMP standard. They channel their power through to the road via an eight-speed Steptronic Sport gearbox and the BMW xDrive all-wheel-drive system. The M Sport differential is fitted as standard on the BMW M850i xDrive and, as well as improving traction, improves agility particularly when the car is exiting corners.

The racing know-how of BMW M GmbH Racing was used for detailed modifications and enhancements as well as the overall set-up to optimise torsional rigidity and ensure the car delivers driving pleasure while having the ability to transport up to four occupants in luxury.

Adaptive M suspension with electronically controlled dampers is standard, as is BMW’s Integral Active Steering – a system that turns the rear wheels (at speeds of up to 45mph) to improve agility as well as reducing the turning circle.

Damping characteristics can be adjusted via the Driving Experience Control switch. SPORT and SPORT+ modes activate optimal responses for dynamic handling. This is noticeably different from the comfort-oriented damper setting in ECO Pro and COMFORT modes.

The new BMW 8 Series Convertible comes as standard with the BMW Live Cockpit Professional. This includes a navigation and multimedia system, a fully digital, high-resolution instrument cluster behind the steering wheel with a screen diagonal of 12.3-inches and a Control Display measuring 10.25-inches across. The new BMW Operating System 7.0 stands out with its cutting-edge, digital functions tailored precisely to the driver’s requirements. When it comes to intuitive operation options, drivers can choose from touchscreen functionality via the Control Display, the iDrive Controller, buttons on the steering wheel and voice control.

As part of BMW Live Cockpit Professional the new BMW 8 Series Convertible includes a host of connected Services as standard, Emergency Call, Teleservices, Over the air and USB map updates, BMW App connectivity and Intelligent Voice assistants. In addition to this we see the introduction of the BMW Connected Package Professional as standard. This features elements drivers are accustomed to, such as Remote Services, Real Time Traffic Information, but with the addition of Concierge Services and Apple CarPlay Preparation.

Apple CarPlay Preparation will now be standard on all new BMW 8 Series Convertible models. This service will be included for 1 year from build, but then renewable via the BMW ConnectedDrive portal thereafter, at either 1 year, 3 years or lifetime subscriptions.

Another element of the operating system is the BMW Intelligent Personal Assistant. Activated by the voice prompt “Hey BMW”, this digital companion assists the driver in operating the car’s functions and gains more skills all the time thanks to seamless updates via the Remote Software Upgrade facility.