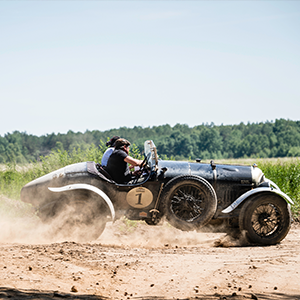 The vintage Bentleys dominated the Endurance Rally Association’s inaugural Baltic Classic Rally taking the three top spots in the Vintageants category. Peking to Paris European Cup winners Bill Cleyndert and Jacqui Norman added to their trophy cabinet, which also includes win of the 2015 Road to Mandalay, after holding their lead from the Copenhagen start to the Berlin finish in the 1925 Bentley 3-4½.

Bill recounted that for him, driving the WRC stages was a real thrill but the entire route was fantastic. Jacqui added: “It’s been a fabulous rally with some really tough navigation to keep us on our toes. I thought that we’d blown it in the airfield regularity and was very relieved to see that everyone else had as well!”

They were followed by Graham and Marina Goodwin in the 1925 Super Sports in second place after a tough battle with Lars and Annette Rolner who had to settle for third place, with just 00:12 between them.

Starting from Copenhagen’s Clarion Hotel on 28 May, the 14-day rally journeyed through Sweden, Finland, Estonia, Latvia, Lithuania and Poland before finishing in Berlin on Saturday 10 June, covering over 4,200 kilometres.

In the Classics category, it was the 1972 Datsun 240Z of Belgium’s Rene Declercq and Eric Claeys who claimed the victory, just 00:39 ahead of Gavin and Diana Henderson’s 1965 Porsche 911. Third place went to David and Jo Roberts in the 1968 Triumph TR250.

Rene said: “Along with winning, the best thing about being on the rally was meeting old friends and making new ones. We will come back next time to defend the victory – in an even faster car.”

A special ‘Spirit of the Rally’ award was presented to the well liked and well travelled crew of Charles and Nellie Bishop with their Vauxhall 30/98.

ERA Rally Director Fred Gallagher said: “What a fantastic two weeks of rallying. We have been lucky to use some of the same terrain as the Rally greats as well as enjoying amazing scenery and great company. The Baltic Classic has been a great success and is sure to become a regular fixture in the ERA calendar.”

The next event on the ERA calendar is another brand new rally, the Blue Train Challenge. Held from 18-22 September, the Blue Train recaptures that nostalgic age of travel with an exciting five-day journey of discovery. The event starts from Deauville and finishes in Cannes, with entries still available.