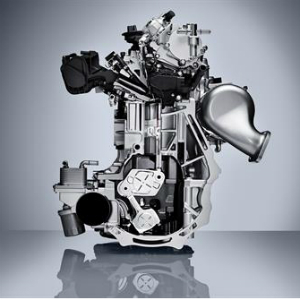 INFINITI’s VC-Turbo variable compression engine was named by the Automobile, Motor and Bicycle Association of Austria (ARBÖ) with the Grand Austrian Automobile Award in the category “Environment”. During the awards ceremony that took place in Vienna last week, VC-Turbo was honoured for setting a new benchmark in terms of efficiency of next-generation combustion engines.

The experts of the automobile club acknowledged INFINITI for introducing the world’s first production-ready engine with variable compression. While in previous years, ARBÖ tended to award alternative propulsion systems, this year the organisation recognised the potential of the VC-Turbo engine which represents the next step in optimising fuel efficiency of the internal combustion engine.

Roland Krueger, president of INFINITI Motor Company said, “INFINITI would like to thank the ARBÖ members for recognising the VC-Turbo engine and the benefits it offers customers.  The beauty of variable compression is that the engine makes an intelligent choice between performance and efficiency, giving drivers the performance they want combined with the efficiency they need. Not only that, it is quieter and smoother. We are excited to bring this ground-breaking technology to the road and, on behalf of the entire INFINITI team, we are grateful for the recognition.”

INFINITI engineers have worked for 20 years on the technology to make VC-Turbo production-ready. More than 100 prototypes were tested so as to deliver a truly innovative gas engine. Thanks to a multi-link system, which is able to adapt the travel of the pistons’ stroke, the all-new engine can seamlessly offer any compression ratio between 8:1 and 14:1. Lower compression ratios secure greater power and torque, whereas a higher compression improves fuel efficiency.

The result is an engine delivering the power output of a V6 and the fuel economy of a diesel powertrain without the emissions associated with a diesel engine. The development objectives of the 2.0-litre four-cylinder engine with single-scroll turbocharger are: 268hp and 390Nm torque while offering at the same time 27% lower fuel consumption than similarly-powered V6 gasoline engines. The first
INFINITI cars equipped with the VC-Turbo engine will be on sale in 2018.