BMW 5 Series Saloon Crowed What Car? Car Of The Year 2017 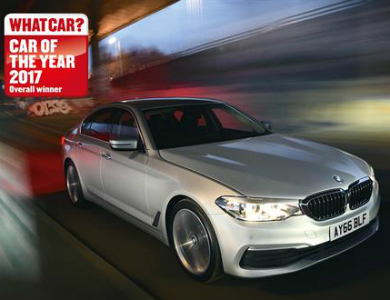 The all-new BMW 5 Series Saloon has been honoured with one of the motoring industry’s highest accolades: the What Car? Car of the Year Award for 2017. The newcomer took the top honour, along with the Best Luxury Car category award, at the magazine’s annual presentation event, staged on 11 January in London.

At the awards, Editorial Director at What Car?, Jim Holder, said: “It’s hard to recall another year with so many exceptional new models vying for our overall Car of the Year award, which makes the BMW 5 Series’ victory all the more impressive.”

“The 520d SE with optional variable dampers is the pick of the 5 Series range. But whichever version you choose, you’ll be getting one of the classiest and most comfortable cars on sale today,” said Holder.

The BMW 5 Series has also been awarded the title of Best Luxury Car with the judges praising its semi-autonomous drive capability, driving dynamics and high level of standard equipment.

Hildegard Wortmann, BMW Group’s Senior Vice President, BMW Brand, collected the award on the night and commented: “For the BMW 5 Series to win the prestigious ‘Car of the Year’ award is an honour and testament to the hard work that goes into producing one of BMW’s core models. The BMW 5 Series is a brand shaping saloon and in times of rapid change within the automotive industry we believe the seventh generation model points the way into the future. It is a truly outstanding car and I am very grateful to What Car? for this great recognition.”

With approximately 7.9 million BMW 5 Series cars sold across the globe thus far, the seventh generation BMW 5 Series continues the finest tradition of its forebears by offering an unsurpassed blend of driving dynamics, comfort and functionality.

The latest BMW 5 Series Saloon uses the very latest technology from within BMW to create a saloon that’s more refined than ever before, significantly lighter, safer, and more fuel efficient. The new generation family of TwinPower Turbo engines provide impressive performance gains, but also show major advances in reducing fuel consumption and emissions. An extensive suite of driver assistance technologies including BMW Lane Keeping Assistant and Lane Change Assistant mean that not only does the new BMW 5 Series Saloon reduce the driver’s workload like never before, it also takes a notable step towards fully autonomous driving.

Other technologies include, Remote Control Parking – as seen first on the new BMW 7 Series – and the optional Parking Assistant and Parking Assistant Plus packages, which enable automated parking with the greatest of ease in both parallel parking spaces and perpendicular or angled spaces. Surround View and Remote 3D View offer peace of mind to anyone who frequently finds themselves manoeuvring in awkward traffic situations and the optional Display Key offers a host of other functions with Remote operation of the auxiliary ventilation being just one example.

As standard on the BMW 5 Series, the latest generation of the Professional Navigation system boasts a fast start-up, even faster route calculation and more realistic 3D graphics in cities. BMW is now the first carmaker to offer Microsoft Office 365 users a secure server connection for exchanging and editing emails, calendar entries and contact details thanks to the car’s built-in Microsoft Exchange function.

In addition to the outright accolades, two more BMW models received price point plaudits – in the ‘£20,000-£40,000’ category, the BMW i3 94Ah earned a win in the Electric Car category and in the Hot Hatch category the BMW M140i was rated as the pick of the bunch in the ‘more than £25,000’ bracket.

The BMW i3 94Ah replaced the previous 60Ah model and has a capacity of 33kWh thanks to the higher storage density of the lithium ion cells. With the range increased to a maximum of 195 miles according to the NEDC cycle the judges on the What Car? editorial team commended the BMW i3 94Ah for its premium feel, comfort and its sustainable production methods. As for the BMW M140i, the judges applauded the eight-speed automatic gearbox for “contributing to the car’s remarkable dual personality”.