Project Endeavour – a Government-backed research project – reached a ‘key milestone’ recently when the first live trials of its autonomous vehicle fleet got underway in Oxford. 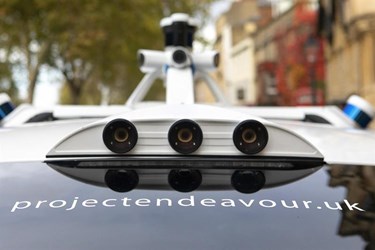 A fleet of six Ford Mondeos, equipped with software capable of Level 4 autonomous driving, is completing a nine-mile round trip from Oxford Parkway station to Oxford’s main train station.

Trials are being run at all times of day and night, to expose the autonomous vehicles to a range of traffic scenarios – from morning commutes to school runs, and a range of weather conditions.

Transport Research Laboratory (TRL), which has recently joined the Project Endeavour consortium, says the trial brings the deployment of commercial autonomous vehicles in the UK ‘one step closer’.

Project Endeavour will run until autumn 2021 with live tests in London, Oxford and one other UK city. The trials will set out to demonstrate autonomous driving in a variety of urban and city environments and develop ‘engagement models’ to help local authorities and communities prepare for the future launch of autonomous vehicles.

The consortium, part-funded by the Centre for Connected and Autonomous Vehicles (CCAV) and delivered in partnership with Innovate UK, is using a combination of advanced simulations and on-road demonstrations to help accelerate and scale the deployment and adoption of autonomous vehicles.

The new partners will focus on the development of a new safety assurance assessment scheme, in a bid to ‘inspire trust and define a consistent approach to safety that will enable future deployments to happen efficiently without slowing down the rate of innovation’.

Camilla Fowler, head of automation at TRL, said: “Trials of Level 4 vehicles are an important milestone, keeping the UK at the head of the field in bringing the benefits of this technology into mainstream use.

“These exciting trials…will open up new opportunities for many more research demonstrations across the UK, which are the forerunners to the full-scale public trials so eagerly awaited.”

“The progress that has been made in the connected autonomous vehicle (CAV) ecosystem is huge, moving from simulation, trials in isolated environments and now to the first live on-road public trials in Oxford.

“We are working with partners to create a systematic approach for other local authorities to engage and interact with CAV trials in their regions, which brings us much closer to CAV deployments becoming a reality to bring benefit to our communities and UK PLC.”

There are plenty of electric vehicle (EV) charging companies in the market today; all with their own unique selling point. As the number of EVs rise, charging