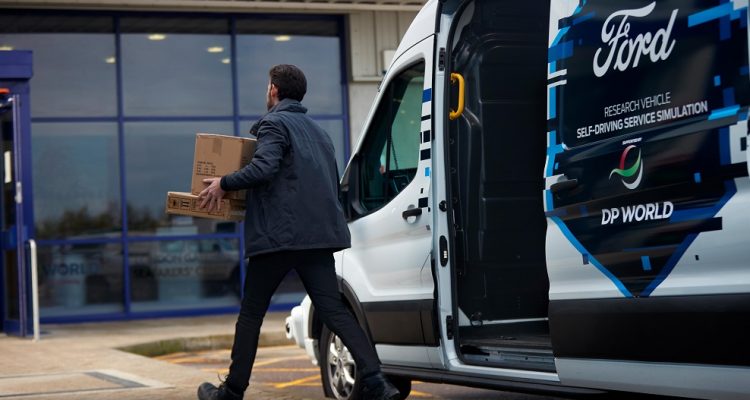 Ford Motor Company and DP World London Gateway have conducted a trial with a simulated autonomous vehicle to demonstrate how useful such future technology could be to those managing – and employed on – large worksites.

The initiative is part of Ford’s Self-Driving Research Programme, designed to help businesses understand how autonomous vehicles could benefit their operations.1 First launched in June to explore the potential impact upon courier services and doorstep deliveries, 2 the DP World trial tested how recipients managed when accessing self-driving delivery vehicles themselves. 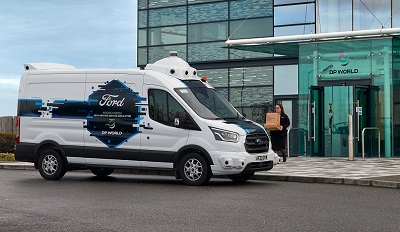 Ford collaborates with DP World London Gateway to demonstrate how autonomous delivery could benefit large worksites such as ports.

The underlying intention behind the pilot programme is to identify new opportunities and models for autonomous vehicle operations – in particular understanding how existing processes and human interactions can work alongside automated vehicles.

“It was incredible to see how enthusiastically the team at DP World embraced working with the support of a self-driving vehicle. We are continuing to work very closely with our customers to learn how these vehicles can benefit their businesses and it is exciting to see first-hand the impact this can have across a diverse range of locations,” said Richard Balch, director, Autonomous Vehicles and Mobility, Ford of Europe. “What worked so well at DP World premises could equally be of benefit at universities, airports and manufacturing facilities.”

Ford has been testing self-driving technology in major cities across the U.S. in partnership with Argo AI. The company plans to invest around $7 billion (€6.02 billion) in autonomous vehicles during 10 years through to 2025 – $5 billion (€4.3 billion) of that from 2021 forward – as part of its mobility initiatives.

DP World London Gateway – one of the UK’s fastest growing ports – is located 40 km east of central London and already embraces automated technology as an intrinsic part of its operations as a deep-sea container port.

For the trial, Ford used a specially adapted Transit fitted out to mimic the look of an actual self-driving vehicle with a driver concealed within a “Human Car Seat”. Employees at the company’s reception building loaded packages into secure lockers in the rear of the Transit. Then, at set delivery times, the Transit travelled to the main reception 3.5 km away so that colleagues there could retrieve them. In the normal way, staff currently retrieve packages from reception themselves. While time consuming, these trips do not warrant a full-time driver.

Every step of the process was monitored by researchers who also conducted interviews with those who took part, before, during and after the trial. They found that employees quickly became comfortable with using the specially equipped van. Some proactively trained colleagues to access their packages, while others were resourceful in overcoming difficulties intentionally introduced by the researchers: such as the wrong parcels being stowed in the wrong lockers.

“Having what appeared to be a self-driving vehicle on site created a real buzz. Everyone wanted to use it. Popping in the car to pick up a package from elsewhere on site might not seem like it takes that long, but across multiple journeys over weeks, months and years, this can add up to a lot of time and money,” said Ernst Schulze, UK chief executive of DP World.

Along with the Port of Tilbury and Ford Dagenham, DP World London Gateway will form Thames Freeport. The UK Government awarded the partners freeport status earlier this year. The partners are currently progressing the business case, with Freeport Tax Site status being awarded on Nov. 19, on their journey to receiving formal accreditation.