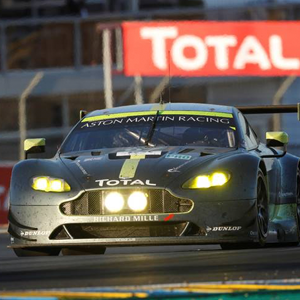 This weekend in the Sarthe the Grand Touring category lived up to its reputation and gave the 258 500 spectators who flocked to the race a thrilling spectacle as the gap between the leaders was never more than 30 seconds.

It was a great show and led to a nail-biting finish between the Aston Martin Racing and Corvette Racing – GM teams. With 45 minutes to go to the chequered flag the #63 Chevrolet Corvette C7.R and the #97 Aston Martin Vantage V8 GTE both pitted at the same moment, and this led to a spectacular battle between American Jordan Taylor and Brit Jonny Adam that went down to the wire.

The latter came out on top on the last lap after a superb duel to give Aston Martin Racing, TOTAL and his team-mates Darren Turner and Daniel Serra a fabulous victory in the LM GTE Pro category.

The Aston Martin engineers had absolute confidence in the reliability of their V8, and they asked us to give them performance,” explains Romain Aubry, the TOTAL Sponsoring & Competition Technical Coordinator.

“We changed the engine lubrication, and this produced instant results with a significant power gain compared to the product they used previously. This proved decisive in qualifying with Darren Turner’s pole position and also in the race.

“The characteristics of our product enabled the team to divide the engine oil consumption by two, and there was only a single top-up during the night when we took advantage of an intervention on #97’s brakes, so we had no negative effects on the strategy.

“Between free practice and the race we carried out around 50 analyses of the engine and gearbox lubricants to give Aston Martin Racing diagnoses in real time – there were no alerts”.

Aston Martin Racing will be back on track on 16th July at the Nürburgring 6 Hours, the fourth round of the FIA World Endurance Championship.