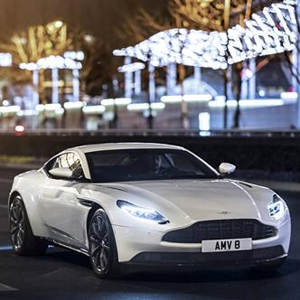 For the first half, global wholesale volumes rose by 67% to 2,439 vehicles as orders continued to rise in the UK, mainland Europe, the Americas and China. The average selling price per model, excluding special editions, rose 25% to £149,000 – principally driven by DB11 – and a higher option take rate across the range.

During the period, Aston Martin completed a £550m refinancing to enhance liquidity, reduce borrowing costs and increase financial reserves. The offering of senior secured notes due in 2022 carry interest of 6.50% on the dollar tranche and 5.75% on the sterling bonds, compared with maturing 10.25% US dollar PIK notes and 9.25% bonds.

The company generated cash from operating activities of £94.6m through the first six months of 2017 and ended the first half with £123.1m in cash.

Adjusted earnings before interest, tax, depreciation and amortisation (EBITDA) rose to £93.0m in the first half, up from £19.4m in the first half of 2016. For the second quarter EBITDA increased almost threefold to £50.4m, representing an EBITDA margin of 22.7%.

During the second quarter, Aston Martin continued its product offensive with the launch of the 4.0-litre twin-turbo V8 variant of the DB11, which combines a top speed of 187 mph with the most fuel efficient powertrain on offer by the company. It also announced plans for its first all-electric, zero-emission model: the limited-edition RapidE set to begin production in 2019.

Demand for the DB11 and continued strong sales of the V12-powered Vanquish S and Vantage S models coincided with sell-out success for special-edition vehicles such as the Vanquish Zagato Coupe and continued development work on the Aston Martin Valkyrie hypercar in conjunction with Red Bull Advanced Technologies.

As the company expands, conversion work is well underway on the new state-of-the-art manufacturing facility in St Athan, where assembly of the upcoming DBX SUV model is due to start in 2019, supporting up to 750 new jobs in South Wales.

Mark Wilson, Executive Vice President and Chief Financial Officer, said: “The strength of our first-half results prove that our strategy is on track. We exceeded our budget for the tenth consecutive quarter, giving us confidence that we will deliver a step-change in full-year performance. We are increasing our baseline guidance for underlying earnings of £175m on revenues of £830m in 2017.”