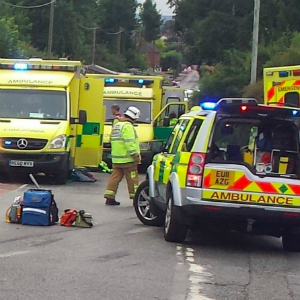 A new report setting out a radically new approach in road safety has won the 2017 Special Award of the prestigious Prince Michael of Kent International Road Safety Awards. The Award will be presented today by Prince Michael during a ceremony at the Savoy Hotel in London.

The award-winning study by a group of 30 international road safety experts from 24 countries, convened by the International Transport Forum at the OECD, reviews the experiences of countries that have made it their long-term objective to eliminate fatal road crashes.

Originating in Sweden, this “Vision Zero” is not utopian, but demonstrably realistic:

Countries, cities and companies around the world are adopting zero road deaths as their aspiration:

Still, 1.25 million people are killed by traffic every year, according to the World Health Organization.

The International Community has set itself the objective to halve global road deaths by 2020 in the UN Sustainable Development Goals. To make progress towards this ambitious goal require new thinking.

The award-winning ITF report “Zero Road Deaths and Serious Injuries: Leading a Paradigm Shift in Road Safety” offers guidance for leaders that want to drastically reduce the road deaths in their communities and sets out how a “Safe System” approach to road safety can underpin this goal.

Congratulating ITF on the award, Prince Michael of Kent said: “The new report comes at a time when the world needs to change up a gear or two to accelerate efforts to reduce the unacceptable toll of death and serious injury on our roads. It is a most welcome addition to the all-important bank of knowledge available to governments and a fine example of the leadership shown by ITF.”

José Viegas, Secretary-General of the International Transport Forum, said: “No-oneshould pay with their lives as the price for a mobile society. Road safety policy can do more than limit the collateral damage; it can make roads and vehicles fundamentally safe for all. In occupational safety, machinery and processes have long been conceived as a ‘Safe System’ built to avoid death and minimize injury in the first place. Our new report wants to entice countries and cities to embark on this journey and turn their road traffic into such a Safe System. This prestigious award is a fantastic encouragement for us.”

Iain Cameron, chairman of the ITF Working Group which prepared the report, said: “We must accept that people make mistakes in traffic if we are to stop the death and serious injury epidemic on our roads. We need a paradigm shift in the way we view and approach road safety policy, and we need it now. It is unrealistic to expect that education and enforcement alone will bring the needed step change. Even road users who know and follow the rules make mistakes. A Safe System creates an environment in which simple mistakes will no longer kill people.”

The award-winning report highlights four principles for policy and design to achieve a Safe System:

2.The human body has a known, limited ability to withstand impact forces.

3.There is shared responsibility for safety among those who use, design, build, operate the system.

4.All parts of the traffic system must be strengthened to multiply the protective effects and ensure that when one part fails the others will provide protection.

The report’s core recommendations to policy makers and the road safety community are:

Establishing milestones that are attainable for clearly defined groups or issues show the overall vision of zero road deaths is long-term but realistic.