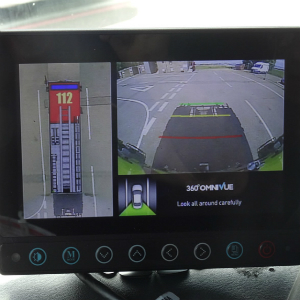 The obvious solution to driver blind spots is so far being overlooked, road safety campaign SteerSafe has warned.

Campaign founder Chris Hanson-Abbott spoke out after a report recommended re-designing lorry cabs as the way to cut the toll of deaths and injuries of vulnerable road users such as pedestrians and cyclists.

The Loughborough University study examined driver fields of view directly from their windows and indirectly via mirrors when at the wheel of the 19 most popular HGVs on the UK roads.

After identifying an alarming array of blind spots, they recommended a new standard be introduced to set minimum fields of view direct through windows and doors.

SteerSafe however believes that fitting 360-degree cameras to lorries provides a quicker and more immediate solution that can also be applied to vehicles that are already on the road – thus saving more lives.

Mr Hanson-Abbott, who was awarded the OBE for services to Vehicle Road Safety said: “Re-designing lorry cabs will cost a fortune and could take years.  Why wait when there is a perfectly good solution available right now?  More lives will be lost needlessly.”

“Bird’s-eye view technology is already tried, tested and in service which gives drivers a continuous bird’s-eye view of a wide footprint all-round the vehicle – 360 degree camera systems eliminate all blind spots on a single monitor image.  This yields massive relief from driver information overloads of multi-image systems via mirrors or monitors, relief from cab re-designs and relief from more lives lost in the meantime.”

“This is far better than relying on multiple mirrors because a driver can take in all the information with one glance at a screen, rather than having to look at a series of mirrors in quick succession.”

The research was carried out by Loughborough Design School on behalf of Transport for London and growing concern for the safety of cyclists and pedestrians.  While road safety has improved in recent years, with deaths and serious injuries falling by 40 per cent between 2000 and 2012, those for cyclists has risen by 21 per cent in the UK, and a massive 59 per cent in London.

Having identified the 19 most popular HGVs on the market researchers modelled the average driver’s field of view.

Worryingly, they found blind spots even when mirrors were deployed and highlighted driver impossibility to interpret images from six curved mirrors at once in busy traffic.  Whether or not a driver could recognise a vulnerable road user from small, distorted images at the edge of a curved mirror was judged “questionable”. 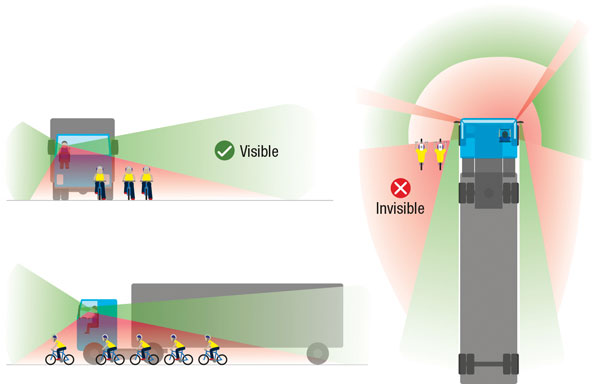 The technology is already fitted to a full variety of vehicles including passenger cars and SteerSafe believes they will soon become standard fit.  Not a life too soon.