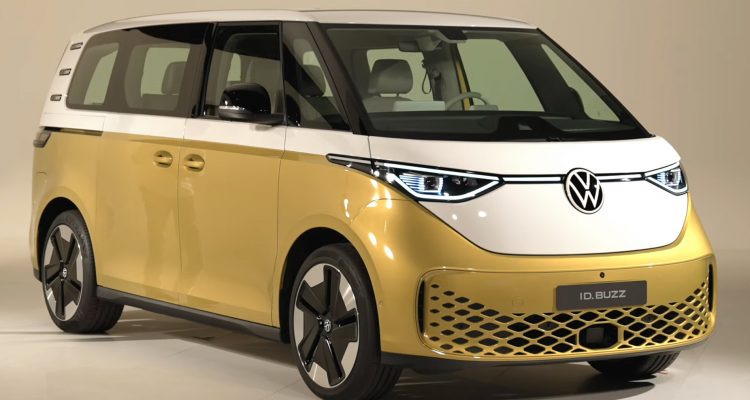 The new ID. Buzz and the ID. Buzz Cargo

An icon returns! With the ID. Buzz1 and the ID. Buzz Cargo1, Volkswagen brings the T1’s DNA into the present – and the future. Like the first 1950 Bus, the new models are cleanly and functionally designed, while at the same time evoking a number of emotions. But how was that accomplished? Volkswagen designers provide exclusive insights into their work. 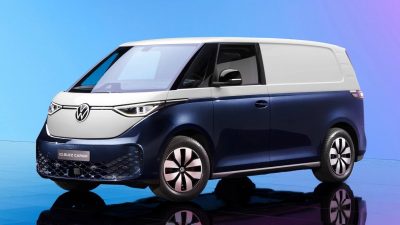 “The T1 was an icon of the 1950s,” says Jozef Kabaň, Head of Volkswagen Design. “With the ID. Buzz , we’re transferring its DNA into the age of electromobility. It’s conveying the icon’s genes and design elements into the digital age. The ID. Buzz is timeless, sustainable and extremely functional at the same time. These qualities make it unique. It draws a lot of sympathy and feeling of togetherness onto the road.”

With the ID. Buzz, Volkswagen is breaking into a new market segment and in doing so is picking up the pace of its electric campaign in all vehicle classes as part of its ACCELERATE strategy. By 2030, at least 70 percent of Volkswagen sales in Europe is expected to be purely electric cars. That’s more than a million vehicles. In North American and China, the e-car share should be at least 50 percent.

Clean character. With their unique lines, the ID. Buzz and the ID. Buzz Cargo – that is, the Bus and the Transporter – are following their ancestor. “An icon has a lot to do with simplicity,” says Marco Antonio Pavone, Head of Volkswagen Exterior Design. “Every child can draw a car like the T1 with just a few lines. And when I see the ID. Buzz , I can say: ‘Wow, we really got it perfect here, too,’” adds Roland Faller, Head of Exterior Design for Volkswagen Commercial Vehicles, continuing: “The ID. Buzz Cargo is not only a practical Transporter, it’s also a notable innovation, with its expressive design and high degree of functionality.”

V-shape and large VW logo. The front section shows how much both new models are taking on the design DNA of the old model and thus are going to bring a smile to people’s faces. The V-shaped hood and large, prominent VW logo lend a charismatic look to the front, while a light strip links the headlamps. The side and rear continue the separation of the design into an upper and lower zone. This becomes especially striking with the optional two-tone paintwork, again reminiscent of the historic T1. 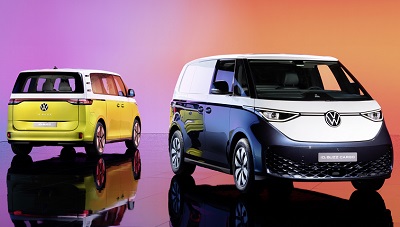 Harmonious proportions and very good aerodynamics. The pragmatic proportions of the zero-emission Bus’s body are captivating. The large wheels sit at the outer corners so the space on the compact footprint can be ideally used. The cw-value, which is especially important for the efficiency of an electric car, is only 0.285 for the ID.Buzz. It was 0.44 for the classic T1.

Two-piece rims. Particularly significant are the rims as well. They have their own convincing design language and are at the same time important for the vehicle’s efficiency and range. “Wheels are actually very important for an electric car,” explains Ranbir Kalha, the designer responsible for the rims and wheels. “They have to meet many technical demands. The primary issue is aerodynamics, of course, and a second issue is weight. Special to the ID. Buzz are rims that look like they are one-piece but are actually hybrid wheels. They consist of two parts and are very lightweight as a result. This type of wheel is being used for the first time in the ID. Buzz,” Kalha continues, adding: “Furthermore, the new wheels of course enhance the individual character of the ID. Buzz, from functional to sporty to elegant, depending on one’s taste.”

Longest wheelbase in the MEB. The 1950 Bus – exact designation: Type 2 T1 – had a self-supporting body that was specially developed for it and a length of 4.28 meters and a 2.40 meter wheelbase. The ID. Buzz and the ID. Buzz Cargo are a good 40 centimeters longer. They are based on Volkswagen’s versatile modular electric drive matrix (MEB). Their 2.99 meter wheelbase is the longest in the MEB. Exterior designer Einar Castillo Aranda notes that “the platform with its compact drive components allowed us to locate the front wheels far forward and place the driver forward and relatively high in the car. The result is a monolithic silhouette with a harmoniously integrated hood.”

Intensive discussion. Although the ID. Buzz doesn’t have a combustion engine, which often takes up a lot of room in conventional models, its front section has a lot of technology, from the heating and A/C system to the electric brake booster. That led to some intensive consultations. “The installation space where the headlamp sits is very tight. We discussed that a lot with our colleagues from Development in order to be able to keep the body volume close to the wheels. Here too, the main aim was to maintain the monolithic silhouette,” Aranda explains.

Keyword: headlamps. Like all ID. models, the ID. Buzz relies completely on LEDs, with the IQ.LIGHT available on demand. Its LED matrix headlamps decisively shape the vehicle’s identity, as Urs Rahmel, Head of Lamp and Rim Design notes: “It was important for us to use light animation to introduce a certain human character to the car. As a result, the ID. Buzz interacts intelligently with its surroundings.” Rahmel’s colleague Sandra Sturmat explains: “As a member of the ID. family, the ID.Buzz initiates a welcome scenario when the driver approaches it. It seems as if the car is opening its eyes, as if it’s looking for eye contact. We think this interaction will create an emotional spark.” 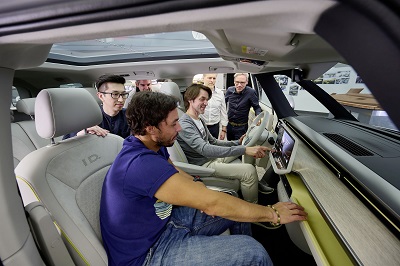 Interior with quiet lines. With its clarity, the design of the ID. Buzz and the ID. Buzz Cargo follows the genetics of the classic T1 – in its very own modern way. This philosophy becomes apparent in the interior, for example, in the linear dashboard – as in the T1 – with its quietly stacked elements, including the smart control concept with the multifunction steering wheel and both digital displays.

Generous open space. The compact electric drive and the battery integrated in the vehicle floor result in open space and a spatial concept with an abundance of room that puts the focus even more on people and their needs. It keeps plenty of room and numerous storage spaces and interfaces handy for the driver and passengers, and the sense of space is generous, light and airy. Jozef Kabaň says: “We developed a vehicle layout with a very logical and intuitive interior concept and a variable use of space.” The front seats in the ID. Buzz are located comparatively high, typical for the Bus, and equipped with armrests. The top model of the seats with its large number of setting options has been honored for its ergonomics by the Healthy Back Campaign (AGR).

Lounge with style and charm. The interior of the ID. Buzz conveys an impression that is at the same time high-quality, chic and cozy – like a modern lounge. Tomasz Bachorski, Head of Volkswagen Interior Design explains: “It was our goal to bring our customers’ home into the vehicle interior. And this in every aspect, from the materials to the digital equipment that you’re used to at home.” Close attention was paid to the interplay of function, color and materials. In the optional “Style” interior packages, the colors correspond to the outside paintwork, and the cool shade “Electric White” adds a nice touch. An especially endearing detail can be found in the side and seat trim of the five-seater, where stylised silhouettes of the ID. Buzz are embossed. Ten-colored ambient lighting is standard; a variant with 30 colors is optional.

In perfect harmony. Design and function have to harmonise perfectly in every detail, as Doreen Langner from CAD Interior Design explains, using ambient light as an example. “We check with the help of the design data on the computer how the light is displayed in the vehicle. And if it is reflected in the windshield, we have to adjust the design on the dashboard so that the light is absorbed and doesn’t disturb the customer.

Yarn from recycled material. Sustainability played a major role in the choice of materials in the ID.Buzz. The interior is completely free of animal leather. Some coverings will have a fabric whose yarn will be composed of recycled PET bottles and plastic that has been recovered from the sea. Marion Dürr, Color & Trim designer added to the idea of sustainability: “We created fantastic combinations from quality materials. We relied on chrome paint rather than chrome and wood effect instead of real wood.”

1 ID. Buzz/ID. Buzz Cargo: The vehicle is a near-production concept vehicle and has not gone on sale yet.