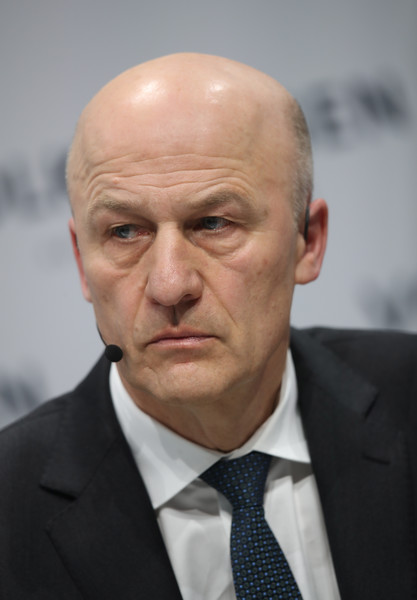 The Volkswagen Group confirms full-year targets for deliveries to customers, sales revenue and operating profit before special items. Sales revenue of the Volkswagen Group rose 3.1 percent year-on-year to EUR 60.0 billion in the first three months of the current fiscal year. The rise, which occurred despite the decline in volumes of deliveries to customers, was mainly the result of mix improvements and the healthy business performance in the Financial Services Division. At EUR 11.7 (11.6) billion, operating profit was in line with the previous year. Operating profit before special items increased by EUR 0.6 billion to EUR 4.8 billion. The operating return on sales before special items rose to 8.1 (7.2) percent. Positive effects arising from the fair value measurement of gains and losses on certain derivatives, improvements in the mix and price positioning and the favorable exchange rate trend more than offset the rise in fixed costs and lower vehicle sales. Negative special items arising from legal risks in the amount of one billion euros reduced operating profit, which declined year-on-year by EUR 0.3 billion to EUR 3.9 billion. The share of profits or losses of equity-accounted investments and the share of profits and losses of the Chinese joint ventures included in that amount were on a par with the previous year at EUR 800 million. Profit before tax was down on the prior- year period, at EUR 4.1 (4.5) billion. Net liquidity in the Automotive Division amounted to EUR 16.0 billion.

Frank Witter, Chief Financial Officer of Volkswagen AG, said: “The Volkswagen Group is once again off to a good start this year. The sales revenue performance and earnings growth in the first three months of the current fiscal year are encouraging. The measurement of derivative financial instruments – an item that generally exhibits a high degree of volatility – also had a positive impact on operating profit. Overall, we have to continue to pick up the pace when it comes to our transformation. We are also facing challenges in connection with increasing global economic risks. Nevertheless, we maintain our targets for 2019.”

Sales revenue of the Volkswagen Passenger Cars brand rose by 7.1 percent to EUR 21.5 billion in the first quarter. Operating profit before special items improved to EUR 921 (879) million. Improvements in mix and price positioning as well as positive cost development compensated for the impact of lower volumes and negative exchange rate effects. In the reporting period, negative special items amounted to EUR 400 million.

At the Audi brand, sales revenue fell to EUR 13.8 (15.3) billion due to, among other things, the new allocation of sales companies. At EUR 1.1 (1.3) billion, operating profit was in line with the previous year. Improvements in the mix and margins as well as positive exchange rates could not compensate for the adverse affects of model launches, phase-outs as part of the product initiative and WLTP-related fluctuations in the portfolio, and higher upfront expenditure for new products and technologies. Effective 2019, the multibrand sales companies have been separated from the Audi brand to increase overall transparency and comparability.

Sales revenue at the ŠKODA brand increased by 8.2 percent to EUR 4.9 (4.5) billion in the reporting period. The operating profit decreased to EUR 410 million. The decline mainly resulted from nega- tive exchange rate effects and cost increases. Meanwhile, volume increases and pricing measures had a positive impact.

Sales revenue at the SEAT brand increased to EUR 3.1 (2.8) billion in the first quarter. Operating profit increased by 5.5 percent to EUR 89 million due to volume and mix effects. This more than offset the negative impact of cost increases.

At the Bentley brand, sales revenue climbed to EUR 456 (351) million in the first quarter. Operat- ing profit improved to EUR 49 (–44) million, which was mainly the result of the availability of the new Bentley Continental GT as well as favorable mix effects and exchange rate trends.

At EUR 5.2 (5.4) billion, sales revenue generated by Porsche Automotive was below the figure for the same period in 2018. Operating profit fell by 11.6 percent to EUR 829 million, due to market and production-related declining volumes.

At EUR 3.3 (2.9) billion, Volkswagen Commercial Vehicles sales revenue was 11.8 percent higher than in the first quarter of 2018. In particular, higher volumes, improvements in the mix and a favorable exchange rate trend led to a 29.9 percent rise in the operating profit to EUR 291 million.

In the first three months of the current fiscal year, the operating profit at Volkswagen Financial Services rose to EUR 638 (608) million.